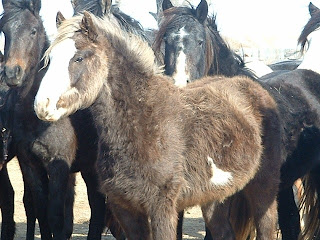 The campaign to save an endangered western horse began with a horse race, a park ranger, a couple of cowboys , and the living legacy of a famous Indian warrior.

In the late 1970s, brothers Frank and Leo Kuntz of Linton, North Dakota, were producing the Great American Horse Race, "fashioned after races done by the Native Americans, cowboys and calvalry--it's I'll race you from here to that hill and over the crick and back over here," Frank Kuntz explains.

Leo had bought a few wild horses native to Theodore Roosevelt National park, and one night in 1978, when he stopped at a sale barn in Dickinson, North Dakota, he spotted more of the distinctive looking horses in the kill pen--destined for slaughter. He bought them and brought them home.

What he had recued were descendants of the hardy, handy horse of the Plains Indians and cowboys, the breed portrayed in the paintings and sculture of Frederick Remington, the swift, bold horse that carried wariors into the battle of Little Big Horn and sped hunters after the great buffalo herds.

When Lakota Chief Sitting Bull surrendered at Fort Buford, North Dakota, in 1881, about 350 of those horses were confiscated by the U.S. government from his band. Some 250 head went to the Marquis DeMores, a French nobleman who established the town of Medora, North Dakota, now headquarters of Theodore Roosevelt National Park, now headquarters of Theodore Roosevelt National Park. In 1884, the HT Huidekoper Ranch, the earliest large-scale ranch in North Dakota, puchased 60 mares from the Marquis and crossed them with the thoroughbred stallion Lexington, as well as other thoroughbred and Percheron stallions. After the Marquis died in 1896, some of his herd was dispersed. What Leo and Frank Kuntz had found were their descendants, inadvertently enclosed when the national park was fenced in 1950.

The horses are "generally roan, square-built, mulish in the hocks, and their bone is rounder than others--they way Frederic Remington described them," Frank says. "They are very solid, very sound, but what sold Leo and me the most on them is their disposition, which is almost like a dog. They are smart and kind, and they buddy-up so wonderful to their owners."

In 1986, the brothers were at the sale barn bidding on more of the horses when they spotted a woman bidding against them for a group that included a blue roan stallion. The bidder was Castle McLaughlin, then a Columbia University graduate student and seasonal ranger who had worked on the park roundup a week before.

"The park had driven several bands and penned them together and they were all milling badly covered with lood and foam," says McLaughlin. "That stallion had been the dominant stallion in the park, and he fought so desperately and so long, trying to climb the walls. Out of respect for his spirit, I decided I had to save him even if I couldn't save any others."

When she found Frank and Leo were preservationists and not meat buyers, she sent the stallion home with them. The following spring she receved a three-year grant from the National Park Service to sudy the horses, their history, origin, management history, and social organization. Two decades later, many of those years working with the Kuntzes, McLaughlin considers Frank and Leo "two ranch brothers who single-handedly saved this line of horses". For their part, the Kuntzes would probably say, "right back at ya".

Through their combined efforts in blood typing and historical research, McLaughlin and the Kuntz brothers created the Nokota name in 1991 and breed registry. In 1993, the Nokota was designated th North Dakota Honorary State Equine. It now has a documented history and preservation plan through the Nokota Horse Conservancy. Created in 1999, the conservancy now owns 34 Nokota horses. Frank and Leo have 600, the largest herd of Nokotas in the world.

"We realize we can only preserve so many. They have to become a commercially viable product to survive," Frank says. "I will feel comfortable when there are 5,000 to 10,000 Nokotas."

Their goals include securing land sufficient to keep the horses without rotating them through leased pastures as they do now. They also hope to establish a museum showcasing the Native American and coyboy history of the horse in America.

"My dream is also to create a Native American polo team using Nokota horses, and to have a Native American compete in the Olympics on a Nokota," Franks says. "They were once a proud horse culture, and the kids on the reservation need to be riding again."

Meanwhile, the horse of the Old West is also doing well in the East, in part because of a couple from Chester County, Pennsylvania...

Other Nokotas are making their way to New York, Virginia and South Carolina, says Blair, who organized the nonprofit Nokota Horse Conservancy and was a founding board member. And Team Nokota, a volunteer support group of Nokota owners, performs at horse shows and expos.

"Our Nokota cross can trot up to a three-rail fence and pop right over," Blair says. "They really do their jobs, and they are the first to greet you in the field. They are very friendly and clever. Other horses come in from pasture with scars and swellings, but not the Nokotas. They have such hard, sturdy legs. The don't need shoes because they have broad, solid hooves. And they don't require a lot of drugs or pampering."

That hardiness evolved through a century of narrow escapes, persecution, and neglect. Between 1880 and 1970, ranchers and later the National Park Service which rather inexplicably regards the horses as undesirable exotic outsiders, killed or rounded up and sold most of them.

In the late 1970s, research showed that prominent ranchers in the 1880s had written about the presence of wild horses that were integral to the ranch era, prompting the National Park Service to keep a small number as a demonstration historic herd but replacing original wild horses with domestic breeds.

"The park took out all the dominant harem stallions and introduced Arabian, quarter horse, and a part Shire bucking stallion so they could make money at sales where buyers might not want old-fashioned-looking Indian horses," explains McLaughlin, now ethnologist and curator at Harvard's Peablody Museum.

Officially, Nokotas appear in two types. The traditional 14 hand to 15 hand Nokotas resemble the Spanish colonial breeds such as Barbs or Andalusions with large, kind eyes, broad foreheads, and thick manes and tails. They are compact with short backs; delicate heads and ears; large round bones; dropped croups; and strong feet. With heads that are straight or slightly concave in profile, they possess keeen intelligence and a clam, curious disposition. The Ranch type is larger boned, standing 15 to 17 hand. It served as the classic ranch horse from the 1880s to 1930s and shows more effects of crossbreeding.

"Many Nokotas are roan, especially blue roan, a rare color, and brown, and there is a small group with the dun factor, which is also rare..." says McLaughlin. Once the horse of cowboys and Indians, Nokotas retain many of their 19th-century attributes, including unusual strength, jumping ability, and endurance. Their calm and affectionate nature makes them ideal trail horses, game horses, show jumpers, cattle horses, and fox hunters.

Although word of their virtues is getting around, Nokotas are still in jeopardy. "We desperately need preservation breeders, people who will continue the lines," says McLaughlin. "It's a year-to-year struggle. It is really cold in North Dakota where these horses are. There is little wind break, and it's hard to get all the horses through the winter."

Click on title above for original article;
http://www.indigenousexchange.com/four_leggeds.html
Posted by Mz.Many Names at 6:24 PM