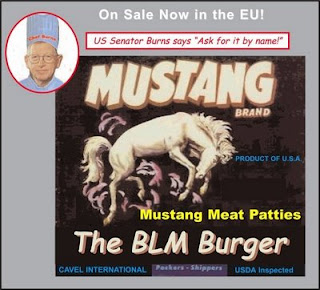 United Organizations of the Horse (UOH), Executive Director, Sue Wallis issued a press release earlier this week in support of Bureau Of Land Management efforts "to control the overpopulation of wild horses on public lands..." The continuing battle over what to do with America's wild horses brings varying opinions from all sides and from many sectors of the government. As executive director of UOH, State Representative, Sue Wallis (R Wyo) leads the organization in their quest to support the BLM mission. Wallis, a rancher and a poet, also carries a third title. In animal welfare circles, she wears the moniker "Slaughterhouse Sue". Though Wallis says she loves horses, the tiniest bit of investigation makes a body wonder about her definition of love.

At a November meeting of The Society for Range Management - Wild Horse and Burro Conference, Wallace said of wild horses, "They are no more, and no less, that a feral invasive species...we ought to be looking at them in the same way we do feral hogs..."

Invoking the thoughts of Socrates and Aristotle on morality and ethics, she spoke of humane slaughter practices and the rights of an animal owner to kill it if they choose. "My personal morality says that it is an unethical waste of a massive amount of healthy nutritious meat that would otherwise be welcomed by a worldwide market and an unconstitutional infringement upon my rights as a horse owner to be deprived of that viable market in order to make a living." said Wallis.

The European Union might have a bit of an argument with her interpretation of healthy nutritious meat. Concerns for public welfare prompted new regulations on the import of horse meat intended for public consumption due to residual chemical substances from the many medications commonly administered them. The European Commission Health and Consumers Directorate-General announced late last year, "Only horses with a register of medical treatments covering a period of six months prior to slaughter should be allowed to be slaughtered for export to the community." Both Canada and Mexico will likely abide by the 180 day quarantine mandated.

The UOA web site brings to mind the old adage "You can't tell a book by it's cover". The organization professes a concern for the animal itself with statements like, "to promote horse welfare and the health of the horse industry." Clearly their concerns are aimed toward the latter. Morals and ethics be damned.

For those still not convinced, Wallis stated in a letter to Congress and the State Legislatures, First, at the heart of it, horses are livestock - just like cattle, pigs and chickens." If you felt the earth moving under your feet, it was probably Aristotle and Socrates turning in their graves at the thought of this woman using the word heart. Wallis continued showing off her extensive knowledge of wild horses by saying, " Wild horses are vicious and brutal and have been known to seriously injured and kill strange horses."vicious wild horses photo by Carrol Abel

Sweet SuzieQ has a ranch of her own so she must know what she's talking about. Her husband even breeds horses there. Of the colts bred on her family ranch, she says, "some were dangerous outlaws..." The rest of her statement gives us an inkling as to her definition of love. "... some were born with defects, some were injured in ways that made them unsound for use. We never imagined that we would be denied the ability to market these animals for their salvage value."

Not to change the subject, but do you remember the heavy metal band of the 80's called "Twisted Sister" ?

BLOGGERS NOTE: Sue Wallis is "a waste of meat." The best part of her ran down her mommas legs (the seeds that werent implanted) People as cold hearted and callous as her shouldnt be allowed to reproduce....and she calls herself "a poet." Poet of Death, I guess.
Posted by Mz.Many Names at 4:37 AM