As some of you may know, a couple of years ago,..I did a FOIA request to the BLM to find out the whereabouts of over 600 wild horses removed from the Seaman, Whiteriver and Caliente ranges in Nevada in 2009. By way of response they provided me with over 500 pages of documents some stemming from 2007 of which I did not request, all confusing and incomplete, and none of which were of the type of documents or info I requested, though they did release contractors contracts but blacked out THE PRICING INFO which makes it impossible to tell just how many horses were gathered because they dont go by the number of HEAD of horses but by the AMOUNT OF MONEY paid to the contractors for each horse gathered. In other words, on paper, they dont count horses but DOLLAR AMOUNTS. Soooooo, not being happy at all with the defendants assessment that the amount paid to the contractor per each horse removed  is protected from disclosure.......and their failure to satisfactorily respond to my FOIA request , I am going to respond challenging them on that;

Cloud Foundation Sues to Save Nevada's Wild Horses (and burros)

RENO, NV (July 1, 2011) – In honor of the American spirit, independence, and freedom this 4th of July, the Cloud Foundation and individual wild horse advocates filed a lawsuit on Wednesday to stop the Bureau of Land Management (BLM) roundup of wild horses on the Triple B, Maverick Medicine and Antelope Valley Herd Management Areas (HMA), located on public land in eastern Nevada. The BLM has failed to show that these wild horses are a threat to the thriving natural ecological balance (TNEB) of this area or even that they are responsible for the few areas on this range which may be exhibiting some impacts from use. Despite the fact that these HMAs were specifically established for the protection of wild horse herds, the BLM is using the land mostly for other uses. There is nothing which justifies the BLM's decision to remove 80% of the wild horses (more than 1,700 stallions, mares and foals) currently residing on this 1.7 million acre range.

"The Wild Free-Roaming Horses and Burros Act does not allow the BLM to employ this intensive management action--removing these majestic symbols of the West from the range and depriving them of their freedom--without determining that such an action is absolutely necessary to maintain the thriving natural ecological balance of the range." states attorney for Plaintiffs, Rachel Fazio. "The BLM hasn't made this determination, so they do not have the legal authority to proceed with this roundup."

The wild horses of the Triple B, Maverick Medicine and Antelope Valley HMAs are free-roaming on the remote high desert mountains and valleys of east central and northeast Nevada--north of Ely, south of Elko on the Utah border. They have been characterized as a diverse, colorful, intermingling herd with some possessing old mustang origins. Many wild horses descend from an old Shoshone Indian herd known for pintos and paints, as well as a number of medicine hats, horses sacred to Native Americans.

"Wild horses and burros would be subjected to irreparable harm by chasing them with helicopters, branding and sterilizing them among other cruel acts including the potential for deaths," states Anne Novak, spokesperson for The Cloud Foundation. "We must stop this abuse now and legal action is the way to do it."

The Complaint for Declaratory and Injunctive Relief was filed in the United States District Court in Nevada on June 29, 2011. Plaintiffs include The Cloud Foundation, Craig Downer and Lorna Moffat. Rachel Fazio and Julie Cavanaugh-Bill are the attorneys for the plaintiffs suing: the United States Bureau of Land Management; Ken Salazar, Secretary of Interior; Robert Abbey, Director of the BLM and Gary Medlyn and Bryan Fuell, the two BLM field managers that approved the roundup.

The roundup was originally scheduled to begin on July 7, 2011, but in response to filing this lawsuit, the BLM has delayed the start of the round-up until July 16, 2011 to allow the Nevada District Court to take a preliminary look at the case.

"Americans across the country and citizens throughout the world look to the American wild horse as an historical icon of freedom," states Ginger Kathrens, Executive Director of The Cloud Foundation. "We simply cannot stand by while the very agency charged with their protection harasses, captures and removes thousands of free-roaming wild horses from the western range and ships them to the midwest to live out their lives in captivity--wild and free no-more."

Interviews and media available on request.

Read where 85% of all public lands is utilized for private grazing, and there are 29,925 permittees. Would be interesting to be able to read the whole report,..but access is limited ......as you will see when you open the link
Posted by Mz.Many Names at 1:08 AM No comments:

Ranchers v. Wild Horses (and Burros) - An Old Case in FAVOR of the Equines

Setting forth the FACT that unbranded equines roaming our public lands are WILD animals same as the grizzley bears in our National Parks system; http://asci.uvm.edu/equine/law/cases/wild/hodel.htmand
and also increasing burden of proof on ranchers who claim the wild equines are destroying their private lands or livlihoods.....

This is an excellent case in support of the WH&B's. It states that the ranchers cannot succeed on this type of a "private property taking" claim unless they can prove a deprivation of the "economically viable use" of their property........in other words, they must show actual damage (costs) incurred to them or their businesses due SOLEY to the WH&Bs....it is not enough to merely claim the WH&Bs are "interfering" with their private property use. Also, another VERY important finding in this case (and something that the BLM has NEVER wanted to admit) is that Congress (and the courts, according to this case) consider the unbranded equines roaming our public lands,....to be WILD animals "same as the grizzly bears that roam our National Parklands." (See Allaed, 444 US @ 66, 100 S. Ct.@ 327) Of course, this being a 1984 case,...will need to be updated (Shepardized) to make sure these findings havent been over-turned.
Posted by Mz.Many Names at 10:50 AM No comments:

But will it pertain to wild horses (and burros) and require those kept in confinement be provided with adequate shelter? Oh, thats right, that provision is already on the books in Nevadas current laws; Animal Cruelty Bill Moves Forward
...for all the good that it does.
Posted by Mz.Many Names at 10:48 PM No comments: 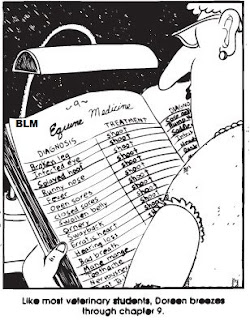 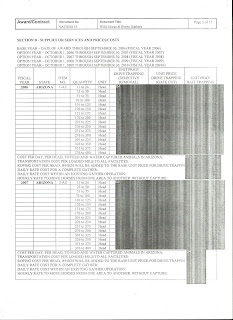 As some of you may know, I have been battling the Nevada BLM since late 2009 trying to find out what happened to 630 wild horses removed from the Seaman, White River, Golden Gate and Caliente Herds. I did a Freedom of Info request and they ...sent me over 700 "made up" documents that are impossible to decipher and didnt tell me anything. They also claimed that the gather contracts were exempt from disclosure do to "concerns" about "pricing" and the contractors rights.....lol. Of course I challanged that determination and lo and behold I won!!! The BLM released the contractors documents to me just last week.....but what have I really "won" cause these documents also dont tell me nothin. The contract reads not for "so many horses" but only lists that the payment will be for "so much a head" and OF COURSE the total pricing info is blacked out,...so it is impossible to tell HOW MANY head without knowing the total amount paid to them! Of course I am going to dispute the withholding of the pricing info on just those grounds. *Please note: Although I only asked for 2009 records, as you can see by this doc, they provided me with docs from 2006 on. Am posting this one just as an example for they all are more or less the same. ..

Johnsonville: An animal lover in eastern New York needs to re-home several rescued animals due to failing health. Paco is a 4-year-old standard size spotted donkey who is very gentle and loving. His pal Li’l Lightning is a 12-year-old pinto mini-horse. Both are intact stallions. They need to be adopted together in a home with no other equines. Six rabbits are also in need of good homes. They include four black and white rexes and two black lop-eared rabbits. For photos or more information, please contact Christine. See them here; http://www.youtube.com/user/MuleKist#p/u/8/3PEH-nd9EEg Contact: Christine Phone: 518-753-7791 E-mail: mulekist@gmail.com
Posted by Mz.Many Names at 9:46 AM No comments: