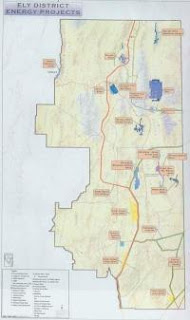 Wind farm project could start construction in 2010
By RUDY HERNDON
Ely Times Reporter
Construction activity at White Pine County's first commercial wind turbine farm could begin as early as next summer, bringing up to 200 workers to the area.
At last count, the BLM's Ely's office had received applications for 17 wind projects -- most of which would be located on public lands inside the county.

The U.S. Bureau of Land Management (BLM) is currently finalizing Pattern Energy's plan of development for its Spring Valley wind project, and the Houston-based developer is hoping to start construction of the 160-megawatt wind farm in late summer or early fall of 2010. The project could be completed by the second quarter of 2011, according to Wells McGiffert, the Ely BLM's renewable energy project manager.

The company has hired international contractor Mortenson Construction to assemble the 66 or so turbines.

While the influx of 150 to 200 construction workers from outside the area could provide a good boost to the county's food and lodging sector, McGiffert said the BLM is working to create short-term opportunities for county residents, as well.

If you've been following the news about the Spring Valley project, the developer's name might not ring a bell. That's because Pattern Energy has only been around since June, when Riverstone Holdings, LLC teamed up with Babcock & Brown's North American Energy Group to purchase the latter company's wind development portfolio, including the Spring Valley project.

Despite the change of management, the right-of-way grant for the proposal remains the same: the project covers roughly 8,600 acres of BLM-administered lands between State Route 893 and U.S. Highway 50, as it veers north toward Sacramento Pass.

During the construction phase, just under 10 percent of that land would be disturbed. Over the long-term, though, the project's footprint would shrink, covering 1 to 3 percent of the land, McGiffert said.

If the BLM signs off on the lease, the agreement would cover a 30-year period.

At least 25 percent of that lease money could stay within the county, pending the passage of federal legislation.

According to McGiffert, Nevada's two U.S. senators are working to split revenues from renewable energy project leases between the BLM, the state and local government entities.

In addition to monies from the lease, the project is also expected to generate a steady stream of tax revenues.

Those figures and other details should be announced within the next month, when the BLM releases its draft Environmental Assessment on the project.

The Spring Valley project could be the first of many renewable energy projects in the area.

At last count, the BLM's Ely's office had received applications for 17 wind projects -- most of which would be located on public lands inside the county.

"We've got a lot of exciting things happening here," McGiffert said. "(I think) we will see quite a few of these wind projects going forward."