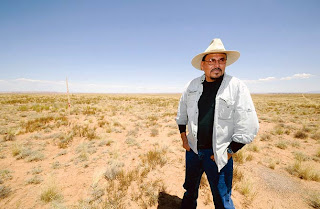 Rancher and farmer LeAndrew Austin stands in the middle of family land July 16 in Chilchinbeto, Ariz. Austin plans to drill for water for his cattle.

In most respects, LeAndrew and Alan Austin are typical Navajo ranchers.

They run a herd of mixed-breed cattle on an under-watered, overgrazed piece of high desert that has been in their family since the Diné returned from the Long Walk.

Both men have day jobs at the McKinley Mine near Gallup, and have to cram their ranching into weekends and holidays.

But in another respect, the Austin brothers are unique. They are, according to soil conservation technician Wilson Halwood II of the Natural Resource Conservation Service's Chinle field office, doing everything right.

While the vast majority of Navajo ranchers have let erosion and overgrazing take such a toll on their land that their cattle require supplemental feed, the Austins are bringing their rangeland back, or as close as possible, to the way it was before generations of cattle and sheep decimated the forage and rainwater carried off the unanchored topsoil.

"It's a pleasure to work with these guys, because they are really committed," Halwood said as the brothers gave the Navajo Times a tour of their rangeland in July. "They want this ranch to be the best ranch it can possibly be."

Their motives aren't entirely altruistic, of course. LeAndrew figures healthy range will be productive range. He's looking forward to the day he can resign from his job as a maintenance overseer at the mine and return to his ancestral land full-time, counting on a steady harvest of organic, grass-fed Angus beef to support his family.

"If you're willing to work with Mother Earth, she'll be good to you," he's fond of telling the farmers he advises.

As Halwood explained some of the practices the Austins have implemented, his boss, District Conservationist Lyndon Chee, was scampering about the Austins' fields like a kid in a candy store. And if you're a cow, a candy store is a pretty apt metaphor for this field.

"See this?" Chee asked gleefully, holding up a sprig from a grey-green shrub. "Winterfat. It's like ice cream to cows."

He pointed out several other species that weren't there three years ago when the Austins bit the bullet and sold off all but 10 of their 70 head to let the land recover. Come fall 2010, they'll be ready to turn the cattle back out - and this time it will be a herd of purebred Angus, the highest-quality, most marketable beef around.

They already have their bull, No Money, so named because Alan forgot his wallet when the brothers went down to Taylor, Ariz., to pick him up. Both brothers withdrew the maximum allowed from their ATM accounts, but they were still short the asking price. Finally the rancher agreed to let them have the bull if they would also take a no-account, chicken-scattering sheepdog off his hands. Alan named the dog "Money."

Expensive as he was, No Money was just the tip of the investment iceberg needed to turn this property around. Through its Environmental Quality Incentive Program, the federal government is into the Austin spread for $500,000, and the Austin brothers - with some help from the tribe - have had to match that by 25 percent, some $125,000 over the last three years. (Unfortunately, they started before the 2009 Farm Bill put the match on a sliding scale based on income.)

A couple of years ago, LeAndrew was wondering if all the effort would be worth it, but he's a convert to conservation.

"If you had seen this land three years ago, and saw it today, you wouldn't believe the difference," he said. "It's great to watch the vegetation come back."

Actually, all you have to do is look over the Austins' fence to the open range beyond. The bare, cattle-churned clay is a far cry from the Austins' waving fields of gramma, Indian rice grass and winterfat.

It all started in 2006 when LeAndrew read an article in the Navajo Times about Halwood's work on an EQIP grant with a rancher in the Tsaile, Ariz., area. LeAndrew and Alan came up with some goals for their spread, and Halwood got special permission to work with them even though the ranch is outside of his jurisdiction.

"We overgrazed. I'm not going to tell you we didn't," Alan said. "But we wanted to do better. These guys (Halwood and Chee) were a big help."

"They talked to me about their resource problems," Halwood explained. "Basically the same thing as everybody else around here: wind erosion and water erosion. They had a vision of how they wanted their ranch to be, and we helped them achieve those goals."

EQIP also works with ranchers to restore and preserve native plants and wildlife. In the Austins' case, they needed to divide their pastures with fencing so they could rotate grazing. To encourage wildlife, every so often a fence post was left long to allow hawks a place to roost.

"Grandma would have said, 'They built that fence lazy way,'" Chee said. "But it's actually the best way for the birds."

The next phase of the project involves a well that will gravity-feed water into a trough in each of the grazing divisions.

"You can't keep cattle in one place if you don't have water for them," Halwood explained.

In keeping with wildlife preservation guidelines, the troughs will have little ramps leading into the water so that if small animals like bats or chipmunks fall in, they will be able to crawl out.

Non-native, water-consumptive tamarisk was removed from the ravines with the help of a specialized team from the National Park Service and volunteers from the Coconino Rural Environment Corps.

They also built 140 rock-and-brush structures in the washes, straining out soil before it ends up as silt in stock tanks.

The NRCS was able to enlist the help of the BIA and the Navajo Nation, which supplied some of the matching funds and sent a tribal hydrologist out to recommend the best place for the well.

Diné College pitched in some experts for a forage survey.

"Once we had the vision, it seemed like so many people were there to help us," LeAndrew said. "If you really want to do something for your land, it's amazing how much help is out there. One thing I would really advise ranchers is, don't be afraid to ask for help."

Alan said he's learned a lot over the past few years, but one thing stands out: "If you want to be a rancher, you have to be a farmer first," he said. "It's all about growing good grass. The cows are more like a management tool."

EQIP applications for next year are being accepted at your local NRCS office. In the Chinle area, call Chee or Halwood at 928-674-3612.