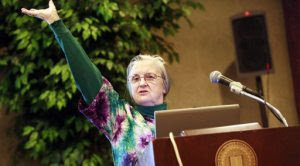 Elinor Ostrom, a professor at Arizona State University, and Oliver Williamson won the Nobel economics prize on Monday for their analysis of economic governance - the way authority is exercised in companies and economic systems.

A political scientist who founded Arizona State University’s Center for the Study of Institutional Diversity has become the first woman to win a Nobel Prize in economics.

Elinor Ostrom shares the prize with economist Oliver Williamson of the University of California at Berkeley for their analysis of the rules governing companies and economic systems.

She founded Arizona State’s Center for the Study of Institutional Diversity in 2008.

Ostrom devoted her career to studying the interaction of people and natural resources.

Ostrom was also the fifth woman to win a Nobel award this year — a record for the prestigious honors.

It was also an exceptionally strong year for the United States, with 11 American citizens — some of them with dual nationality — among the 13 Nobel winners, including President Barack Obama, who won the Nobel Peace Prize on Friday.

Ostrom, 76, and Williamson, 77, shared the 10 million kronor ($1.4 million) economics prize for work that “advanced economic governance research from the fringe to the forefront of scientific attention,” the Royal Swedish Academy of Sciences said.

Ostrom, a political scientist at Indiana University, showed how common resources — forests, fisheries, oil fields or grazing lands — can be managed successfully by the people who use them, rather than by governments or private companies.

“What we have ignored is what citizens can do and the importance of real involvement of the people involved — versus just having somebody in Washington ... make a rule,” Ostrom said during a brief session with reporters in Bloomington.

Ostrom said it’s an honor to be the first woman to win a Nobel Prize in economics — and promised that she won’t be the last.

She said people discouraged her from seeking a Ph.D. when she applied for graduate school but she loved studying economics.

Williamson, an economist at the University of California, Berkeley, focused on how firms and markets differ in the ways that they resolve conflicts. He found that companies are typically better able to resolve conflicts than markets when competition is limited, the citation said.

The academy did not specifically cite the global financial crisis, but many of the problems at the heart of the current upheaval — bonuses, executive compensation, risky and poorly understood securities — involve a perceived lack of regulatory oversight by government officials or by corporate boards. The Nobel awards on Monday were clearly a nod to the role of rules, institutions and regulations in making markets work.

“There has been a huge discussion how the big banks, the big investment banks have acted badly, with bosses who have misused their power, misused their shareholders’ confidence, and that is in line with (Williamson’s) theories,” prize committee member Per Krusell said.

Ostrom devoted her career to studying the interaction of people and natural resources. One notable publication she wrote in 1990 examined both successful and unsuccessful ways of governing natural resources — forests, fisheries, oil fields, grazing lands and irrigation systems — that are used by individuals.

To explain her ideas, the academy cited an example about dams in Nepal that Ostrom used in her 1990 book “Governing the Commons: The Evolution of Institutions for Collective Action.”

Local people had for many years successfully managed irrigation systems to allocate water between users, but then the government decided to build modern dams made of concrete and steel with the help of foreign donors.

“Despite flawless engineering, many of these projects have ended in failure,” the academy said.

That was because the new, modern dams cut out communications and ties between the users. The new dams required little maintenance whereas the earthen local dams forced users to work together to keep them functional.

Ostrom told the academy by telephone that she was surprised by their choice.

“There are many, many people who have struggled mightily and to be chosen for this prize is a great honor,” Ostrom said. “I’m still a little bit in shock.”

Ostrom doesn’t know exactly how she will spend her share of the $1.4 million in award money, but she said she will invest it in her students and “wonderful” colleagues.

Williamson said he was “gratified” by the honor and hoped that in the future “organizations will play a more prominent role in the study of economic activity.”

“The organization of the government itself is something which we ought to examine in a more self-conscious way — the Federal Reserve and the Treasury and the Securities Exchange Commission,” Williamson said. “The mission that each of them has is mainly economic but should be informed by good organizational practices.”

Williamson previously was a consultant to the U.S. Federal Trade commission from 1978-1980 and a special economic assistant to the Assistant Attorney General for Antitrust at the U.S. Department of Justice in 1966-1967.

He was cited for his studies on how organizations — including companies — are structured and how that affects the cost of doing business. According to his theory, large private corporations exist primarily because they are efficient.

“Large corporations may, of course, abuse their power,” the citation said. “They may for instance, participate in undesirable political lobbying and exhibit anticompetitive behavior.”

But Williamson found it is better to regulate such behavior directly rather than with policies that restrict the size of corporations, the academy said.

Paul Krugman, a Princeton University scholar and a columnist for The New York Times, won the prize last year for his analysis of how economies of scale can affect international trade patterns.

The Nobel prizes, with the exception of the economics prize, were established by Alfred Nobel, the Swedish inventor of dynamite, in his will in 1895. The Economic Sciences prize, the last Nobel award to be announced this year, was created in 1968 by the Swedish central bank in memory of Nobel.

In addition to the prize money, Nobel winners will receive a gold medal and diploma from the Swedish king on Dec. 10, the anniversary of Nobel’s death in 1896.