Review ...
‘Mustang: The Saga of the Wild Horse in the American West,’ by Deanne Stillman
By Jack McNeel, Today correspondent

The history of the horse in the Americas goes back millions of years before humans of any color inhabited the earth. Then they disappeared from this continent, about 12,000 years ago, till reintroduction by the Spaniards in 1519. Since that time horses have had a major impact on the history of North America. Deanne Stillman, in her book “Mustang: The Saga of the Wild Horse in the American West,” tells that history from prehistoric times to the current day.

It’s not an “Indian” book, but horses have been so intertwined with Native American life over the past 400 or 500 years, depending on when a particular tribe first got them, that the history of Native peoples in North America cannot be told without referencing the importance of horses. Stillman tells of the vision that Montezuma had before Cortez arrived with the first horses, a vision that the fair-haired god Quetzalcoatl would return riding a fierce animal breathing fire. That vision essentially came to pass when Spaniards arrived on horses and quickly conquered the Aztec empire.

It was those horses, and others which followed that would expand northward and change the way of life for many Native tribes. Oral history also indicates that small pockets of horses were already here; survivors of the ice age, and later joined with those from Spain.

Stillman writes of that period, “Shortly after their return to the New World, horses swept through the deserts and plains like a fast-moving secret. They partnered up quickly with Native Americans, players taking to the script with astonishing ease. From the Apache and Comanche to the Zuni to the Hopi to the Navajo to the Ute; from the Shoshone to the Flathead, Crow, and Nez Perce; from the Arapaho to the Ponca, the Cheyenne, the Sioux, the Mandan, the Ojibwa and beyond, horses allied with tribe after tribe – perhaps not in that exact order, but the deed was done, and by the early 1700s, it was as if their kind had never disappeared from their native turf.”

She tells of particular individuals and their association with horses. Wakara, a Ute, who led “perhaps the biggest horse theft in the history of this country,” and Crazy Horse, Black Elk, and others.

Stillman writes about the Battle of the Little Bighorn and the involvement of horses during that battle. “These beleaguered four-legged troops were the great unsung heroes of that horrible firestorm in the greasy grass.” She writes about the one cavalry horse that survived, a horse named Comanche; 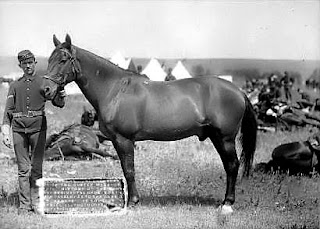 and the horse cemetery that few know about located between Last Stand Hill and the Indian Memorial erected in 2003.

Shortly after the Indian wars, Buffalo Bill begins his Wild West spectacles and takes them around the world. He visits Europe, taking horses with him along with buffalo, longhorns, elk and deer, sharpshooters like Annie Oakley – and nearly 100 Lakota people. Black Elk was one of those who took the opportunity to see more of the world and the white man’s ways.

Stillman tells of the cattle drives and the millions of horses and cattle that were moved from Texas to markets farther north. She writes about horses made famous by the movie industry after the turn of the century and the cowboy stars with which they were associated: Tom Mix, Bill Hart, Gene Autry and others. And she also tells of the deadly abuse sometimes used in movies that resulted in the injury or death to scores of horses.

It was an event in this same vein that prompted Stillman to write “Mustang,” and what the final third of the book is about. In 1998, she heard of the massacre of 34 wild horses near Reno, Nev. Stillman had a long association with horses and these killings sparked her interest in wild horses resulting in years of research that led to the production of this book in 2008.

Two million wild horses were scattered across 17 states when the 19th century came to an end, most of those in Nevada. Today, there is an estimated 25,000 left in small remote areas in half a dozen states. She documents the cause for this drastic reduction often in vivid detail of horses rounded up and sent to slaughter houses or simply shot and left to rot. She tells of individuals and their efforts to provide legal protection for the wild mustangs, and those working to eliminate wild horses. And the controversy continues today.

It’s a book of passion about the “wind drinkers,” the mustangs, who have played a role in the history of this country.