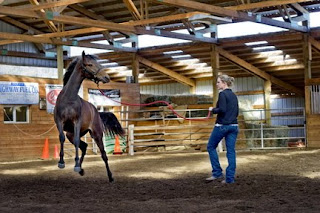 Erica Fitzgerald works with Dolly, a yearling filly brought in from the wild this summer, at the Sept. 26 National Wild Horse Adoption Day event in Dallas, Ore., sponsored by Double D Mustangs, the Pacific Wild Horse Club and the Bureau of Land Management.When you're turning a thousand pounds of wild animal into a loving companion, the transition can be a bit bumpy.

Especially on the first day.

Dawn Marten jumps out of the way of a wild-eyed mare. Dust flies as the mustang circles Marten inside a small pen. "Oh, too much pressure," the horse trainer says nonchalantly.

The pen is set up inside the open-sided barn of Double D Mustangs, a rescue and training facility for wild horses in Dallas, Ore. It's National Wild Horse Adoption Day, Sept. 26, and this facility is one of 34 around the U.S. that have taken in horses from the federal Bureau of Land Management to be adopted.

Under the Wild Free-Roaming Horses and Burros Act of 1971, the BLM determines an "appropriate management level" of wild horses on federal lands. Without sufficient numbers of natural predators, unmanaged herds double in number every four years, according to the BLM -- hence roundups and adoption events.

In Oregon, the BLM manages some 2,700 wild horses in 19 herds, says Tara Martinak, spokeswoman for the bureau's Burns District. Before adoption days, the horses are vaccinated against a number of diseases and treated for internal parasites, she says. Then they are available at the BLM corral in Hines or at satellite adoption centers, such as Double D Mustangs. Adoption fees start at $125.

But Double D is not just a place where you can pick up a horse for cheap, says Debbie Driesner, owner of the facility. Wild horses can be unmanageable if they're not trained properly; too many adopted mustangs end up at the rescue facility. (Driesner says she takes in about four mustangs a year, based on how many she can find homes for.)

That's why the Pacific Wild Horse Club -- Driesner sits on its board -- educates and trains prospective owners on how to turn a mustang into the greatest horse they've ever known.

"It's not like you see in the movies, where you just give it an apple and the horse comes up to you," Driesner says. "You've got to know how a horse communicates, its body language."

You definitely wouldn't expect the mare in the Double D ring to eat an apple out of your hand. Her coat is dusty, her mane and tail ragged. She is fresh off BLM land and has never been handled. Her eyes flick around the watching crowd and back to Marten, the trainer.

Marten knows the horse's language as if it were her own. She explains the "imaginary drive line," the line just behind its withers. And she talks about applying pressure to the mare, which means triggering her flight instinct by approaching her from behind that line.

"When I'm behind the driveline and put pressure on her, she either has to run away or face me," Marten says. "The choice is hers, but she needs to learn that the right answer is to face me."

That, in a nutshell, is the way Marten turns a frightened mustang into a somewhat manageable horse in just over an hour. She applies psychological pressure, and every time the mustang so much as looks at her for a second instead of bolting, Marten moves away. The horse quickly learns that facing Marten is the route to the reward.

Within five minutes of starting, Marten can touch the horse's flanks with the end of a whip without triggering flight. Within 10 minutes, she's holding the rope attached to the mare's halter and scratching her back with the whip.

The horse is licking her lips, which Marten explains is a form of stress relief.

This is the gentling process. It will go from putting a rope on the horse to walking it around to brushing and handling it. The average horse owner with some experience should expect to put a saddle on a mustang in about six months, Driesner says.

This quick turnaround comes from the mustangs' herd lifestyle, says Kevin Sink, a trainer for the wild horse club who participates in the Mustang Heritage Foundation's Trainer Incentive Program. "They have to trust out in the wild," he says. "You become that security for them; they rely on you."

Sink says he's addicted to mustangs and that the bond with them is stronger than it could be with a horse from a domesticated bloodline. Take the gray stallion in the pen with Sink. He was a devil 100 days ago, Sink says, and especially shy about having his face touched. Now he lowers his head onto Sink's shoulder, lets the trainer wrap an arm around his face and seems to almost fall asleep with his chin on Sink's neck.

Aside from the trusting personality these horses develop when trained, they have gained ardent supporters through a number of unique qualities: They don't stress easily once trained properly, as they've dealt with many dangers in the wild; they are very healthy on average; they have tough feet that don't need shoes; and they are versatile, able to drive cattle, ride dressage and perform as show horses, the trainers say.

And they're great with kids. Which is why Driesner is also the president of Mustangs and MOHR, which stands for Mustangs Offering Hope and Renewal. The organization takes in youths sent by the Polk County juvenile system and elsewhere and builds their self-esteem by teaching them horsemanship. Along the way, the youths clean stalls and brush mustangs. On Tuesdays and Thursdays, the ranch offers free rides to kids from nearby communities.

"It's always been my dream to work with kids and horses," Driesner says. "We take it one horse at a time and one kid at a time."

That slow-and-steady process is best in approaching the mustangs, too. Later in the day, when another mustang fresh off BLM land responds to Sink's gentle approach with panicky fury, the trainer lowers his eyes and his voice and tries again.

"This is a long and boring process," he says to the crowd. "We'll just see who has the most patience."

He didn't always have so much patience, he says. After he started working with mustangs, he recalls, his son said, "Why didn't you start doing this sooner? You're much calmer now."