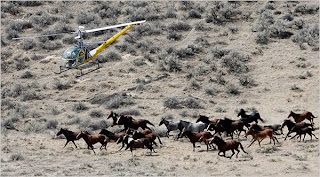 Unlike the 180 existing, unmanned federal wild-horse areas, the new, staffed preserves, including one in the East and one in the Midwest, would seek tourists.

HELENA, Mont. — Interior Secretary Ken Salazar said Wednesday that he was proposing to create seven new wild-horse preserves, including one in the East and one in the Midwest, to address the problem of a growing population crowding the Western range.

The program, which also applies to wild burros, would expand the use of contraceptives and would geld more herds on public lands in the West, Mr. Salazar said.

The seven new preserves would accommodate some 25,000 non-reproducing horses. The preserves’ size and exact sites have yet to be determined, however, and the entire program is subject to Congressional approval. A spokesman for Mr. Salazar had no estimate of the total cost but put the expense of creating the two preserves in the East and the Midwest alone at some $96 million.

The goal is to reduce not only the 37,000 free roaming horses and burros in the West but also the 32,000 housed in corrals, where they must be fed and cared for at government expense. In 1971, there were just 25,000 wild horses and burros.

“The arid Western lands simply cannot support a population this large without significant damage,” Mr. Salazar said from Washington in a conference call with reporters.

The welfare of wild horses, a resonant symbol of the Old West and pioneer history, remains a politically sensitive issue for Americans, and officials emphasized that the new program would not involve euthanasia or slaughter of horses, neither of which is permitted now.

Yet the proposal quickly drew criticism from wild-horse advocates. Ginger Kathrens of Colorado Springs, a maker of documentary films who has chronicled the lives of a wild-horse herd in Montana, said that blocking reproduction could alter the animals’ behavior.

“It takes the wild out of wild-horse herds,” she said. “They’re families in sophisticated societies. Creating gelding herds and preventing them from reproducing is managing them toward extinction.”

But ranchers, who see wild horses as competing with cattle for grasses and water, welcomed the proposal. Jeff Eisenberg, executive director for the Public Lands Council, a group that works on public lands issues for ranchers, said Mr. Salazar’s proposal was a big step toward a solution.

Mr. Salazar said the oversight structure for the new preserves had not been determined. He suggested that the federal government could enter into a partnership with figures like the wife of T. Boone Pickens, Madeleine Pickens, who has shown an interest in creating a refuge for horses. Or the program may be solely government-administered, he said.

The Interior Department said the new preserves would improve conditions for horses that are now confined to crowded corrals and would curtail government spending on their care. “It’s a savings to the taxpayer and better for the horses,” Mr. Salazar said.

Unlike the 180 existing, unmanned federal wild-horse areas in the West, Mr. Salazar said, the new, staffed preserves would seek to draw visitors and promote environmental tourism. “We want to showcase the herds,” he said.

But Ms. Kathrens, the wild-horse advocate, said the government should instead put a priority on reducing the millions of head of cattle that graze on public lands, so that horses would have more room.

In addition to the preserves, federal officials will try to loosen current rules under which wild horses and burros can be adopted, so that more people will be able to take one home.

“The public’s demand for wild horses and burros has declined sharply,” said Bob Abbey, director of the Bureau of Land Management, an Interior Department agency.

A tax payer funded circus for Mustangs and Burros. Really? Really? Are you serious Salazar? This is your way to showing your concern for a national treasure? You are joking right? No? Ugh. BLM = bloody lies & mismanagement.

I am thankful Ginger Kathrens was quoted. She is an outstanding voice of reason among many voices of reason & logic.

It is so important to keep in the forefront of our thoughts WHY the dept. of interior and the BLM are desperate to remove Mustangs and burros. Uranium mining is an even greater pressure point than the $$ made from mega cattle corporations, cattle grazing right or other special interest groups lobbying in Washington for use of public lands. The Iranian President is one of the world's largest bloodthirsty, hungry-for-world domination middle eastern nation leader when it comes to atomic energy. Dig deep & it is the UAE funding the Association for Mining Industries who are hot to trot for surveying and then pilfering as much uranium as humanly possible from the Rocky Mt states