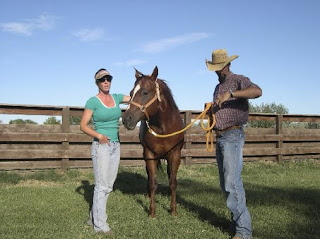 Stephanie and Dave Duquette lead a 6-year-old quarter horse gelding to a corral at their horse training center in Hermiston. The couple are active in pushing to reinstate U.S. horse slaughtering and processing into meat for export.
Ranchers, Native Americans and others are pushing for the renewed slaughter of horses in the U.S. -- possibly starting in Oregon -- and processing them into meat.

Groups are lobbying Congress to introduce a bill this summer to allow the U.S. Department of Agriculture to resume inspecting horse meat for human consumption. That would reopen the door to foreign exports.

In addition, the Confederated Tribes of Warm Springs are considering building a slaughter and processing facility -- possibly for pet food -- on their reservation north of Madras, as recommended last spring by a coalition of Northwest tribes.

The success of either proposal is far from certain. A congressional spokesman said bills that favor slaughtering horses face a chilly reception, and a tribal spokesman said it's too early to say much about the Warm Springs idea.

Yet the efforts, in addition to riling animal-rights advocates, underscore a rural-urban divide and the desperate state of America's horse industry.

Supporters say they need a way to deal with tens of thousands of unwanted horses. The glut was caused by factors such as uncontrolled breeding, closure of the last U.S. horse-processing plants two years ago and an economy that has left many owners unable to pay for feed and care.

The situation has led to a steep decline in horse prices, overgrazing on Native American reservations, and incidents of horse abandonment and neglect, among other problems.

"We think it is very fair and accurate to say there are probably 100,000 horses that would go to processing today" if a plant were available, said Wyoming state Rep. Sue Wallis, a rancher emerging as a national leader in pushing to reinstate horse slaughtering.

Jenny Edwards, who runs the nonprofit Hope for Horses rescue outfit in Woodinville, Wash., dislikes slaughtering but says something must be done. "Everybody who has open land is getting horses dumped on it right now," she said.

But animal-rights advocates find the notion of killing horses inhumane and repugnant. "This is a predatory business," said Chris Heyde, spokesman for the Animal Welfare Institute in Washington, D.C., who called reports of horse abandonment exaggerated. "It is making a political game out of a serious issue."

The issue splits along urban-rural lines, with city dwellers more likely to see horses as companion animals that merit protection and country people more likely to view them as livestock suited for "canner" prices when they become old or lame.

"Why is it OK to euthanize 9 million dogs and cats a year?" said Stephanie Duquette, a Hermiston horse trainer who writes about horse issues and supports slaughtering and processing. "Because no one wants to eat them."

Until two years ago, as many as 100,000 horses a year were killed in the U.S. for meat for foreign markets. A 2007 federal court ruling closed the nation's last horse-processing plant -- Cavel International in DeKalb, Ill. -- on the heels of two Texas closures resulting from a state decision to enforce a 1949 ban on horse-meat facilities.

Terry Richard/The OregonianWild horses await inspection at a BLM adoption in Madras at the Jefferson County Fairgrounds in 2003. Adoption rates have plummeted in recent years, leaving the BLM to contend with thousands of horses no one wants.
Then came the economic recession and job losses, on top of skyrocketing hay and grain prices. Many owners found themselves unable to pay the roughly $1,200 annual cost of caring for a horse.

-- Owners who once could sell a horse for slaughter for 40 to 80 cents a pound now face paying about $600 to have the animal euthanized and removed. Processors in Mexico and Canada now pay only 6 to 10 cents a pound and reject many older U.S. horses, according to Dave Duquette. Dennis Arnzen, owner of the Intermountain Lifestock Inc. sale yard in La Grande, has seen some horses bring only 3 cents a pound.

-- Adoptions of wild horses are down about 20 percent from 5,000 in 2006, said Don Glenn, division chief of the U.S. Bureau of Land Management's Wild Horse and Burro Program in Washington, D.C. The agency has 36,000 wild horses on 29 million acres in 10 Western states, roughly 8,000 more than rangelands can sustain. The BLM is also holding 22,100 unadoptable horses at Midwestern ranches, Glenn said, a big reason the agency's wild-horse costs are projected to balloon from $52 million in fiscal 2009 to $68 million next year and $100 million in 2014.

-- Native Americans say herds of horses are trampling berries and roots -- an important part of Native feasts -- and damaging habitat for salmon and steelhead. An estimated 4,000 ownerless horses roam the 640,000-acre Warm Springs Reservation, for example, and 12,000 live on the 1.4 million-acre Yakama Reservation in Washington, said Arlen Washines, Yakama tribal spokesman, at a meeting of tribes in May. The problem remains even though both tribes corral and sterilize wild stallions.

-- Reports of abandoned, starving horses are increasing. Glenn tells of a Wyoming rancher he spoke with "who just acquired seven horses he didn't buy and didn't know he had until he went out and counted his horses." Malheur County Sheriff Andrew Bentz said a horse found abandoned in Nevada had its brand cut off so it couldn't be traced.

Congress has given mixed signals on the issue. Lawmakers attached a rider banning USDA inspections of horse meat this year as part of an appropriations bill. In addition, bills pending in the House and Senate would amend the 1970 Horse Protection Act to prohibit transporting horses to slaughter; the tougher Senate bill would make it a felony.

At the same time, a law passed in Congress requires the BLM to destroy unwanted wild horses or sell them without limitation -- meaning many could go to slaughter, Glenn said.

"There is a lot of public outcry against it," he said of the prospect of sending BLM horses to processors. "We have not made the decision to do that."

Wallis, the Duquettes and others have formed advocacy groups to push a proposal they're calling the H.O.R.S.E. Act of 2009 (short for Humane and Optimal Restoration and Sustainability of Equines) to reinstate USDA inspections. Horse meat could be exported to China, Mexico, France, Italy and other countries where it's consumed by people.

Scott Kuschmider, a House Agriculture Committee spokesman, said he doubts the bill has much chance given public attitudes on killing horses.

Meanwhile, the National Congress of American Indians adopted a resolution at a meeting in Niagara Falls, N.Y., last month in favor of allowing tribes to establish horse slaughtering facilities within their jurisdictions.

The report suggested that the first processing facility be built at Warm Springs, which has a track record of culling herds through slaughter.

Jason Smith, range and agriculture manager for the Confederated Tribes of Warm Springs, noted that the plant could be built regardless of congressional action on the USDA by focusing on pet food.

But no decision has been made, he said.

"We've got to make sure it's right to do that," Smith said. "It's really kind of in its beginning stages."