ASSHOLES! Look at what you have done by treating wild horses like domestic cattle at livestock auction-you DO NOT go yelling at them and poking at them with things!!I will say it again: ASSHOLES!! 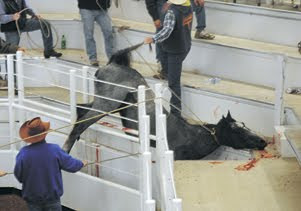 A wild-horse auction turned chaotic when a stud tried to jump a fence, another horse escaped during loading into a trailer and another reportedly died Friday afternoon in Dickinson.
To control population and administer a research contraceptive, wild horses in Theodore Roosevelt National Park near Medora were rounded up earlier this week and sold at auction Friday at Stockmen's Livestock Exchange. The auction was moving quickly when bidding on Bashful, a 2-year-old stud, began and about four minutes into his bidding, things came to a screeching halt. After being tapped on the rear by a ring attendant's flag, an anxiety-ridden Bashful attempted to jump a 6-foot fence separating him from the crowd. Screams erupted and people began to scramble. As the horse was struggling to get his rear portion over the fence, his rear right leg became entangled between thick wires. The horse began to violently thrash in an attempt to break free, biting anything in its way. Bystanders said the horse's front legs knocked an elderly man to the ground. As the horse began thrashing, its front legs stomped the man. "He landed in the crowd, then crawled over it (fence) and then he was in the first walkway and he was just stomping and kicking because the man was underneath him," said Dan Sparling of Bismarck, a witness to the incident.
Larry Schnell, manager of Stockmen's Livestock Exchange, said he was unaware if anyone was hurt, but had heard reports. Stark County Sheriff Clarence Tuhy said a man was transported to the hospital in an ambulance. No tranquilizers, rope or wire cutters were on hand to assist in freeing the horse. "I've been doing this for 35 years and I don't remember anything close to that happening," Schnell said. Status of the injured man is unknown. Some people experienced with wild horses feel the event could have been handled differently. "Anybody that's got a little common sense, you don't start bringing these wild horses in," said Frank Kuntz, executive vice president of the Nokota Horse Conservancy, a nonprofit group aimed at wild-horse preservation. "Bring them in separate. Plus, who knows how these guys are handling them out back? They should have the fence higher. It's total stupidity and total inexperience."
Horses were dropped off at the livestock yard Thursday afternoon, said Valerie Naylor, TRNP superintendent. "They bring them here to the sale barn, turn them loose to these guys and leave," Kuntz said. Rev. James Kilzer of Richardton said one buyer who loaded his newly purchased horse into a trailer found it dead a short time later. "The buyer checked for breath … the horse died of shock," Kilzer said. Calls to Dr. John Rowe, a veterinarian on hand during the auction, went unreturned. Later, a gray mare escaped a corral while being loaded into a trailer. Several people went after her with trucks and on foot. Michael Sparling of Bismarck, who didn't intend to buy a horse at the auction, purchased Bashful for $35 with plans to rehabilitate and train the horse using a natural training method. "A horse like this, you should never trap like that," Sparling said. Patty Griffith, a horse trainer from Toppenish, Wash., plans to train the 11 horses she and her husband purchased. Griffith has attended several wild-horse auctions and said horses and protocol at the auction could have been handled better. "Those horses wouldn't even be rattled if they didn't come along with those fly swatter things and scare them," Griffith said. "They are in a hurry. They're doing their job, but these aren't cows."
The horses sold for prices ranging from $35 to more than $1,400, surprising many. "The prices were much higher than we expected," said Marylu Weber, a volunteer for the roundup and a member of Nokota Horse Association, another wild-horse preservation organization. "This is phenomenal prices for these horses," said horse buyer Nola Robson of Hayfield, Minn. Naylor said 77 horses were sent to auction and 77 were sent back into the park, including most of the breeding-age mares. "Everything went very well," Naylor said. "It's unfortunate this had to happen at the sale."

BLOGGERS NOTE: I hope the injured man sues the pants off of the NPS as well as the livestock co for gross negligence in the handling of wild horses. Maybe they will stop offering them at public auction with no limitations. Maybe its time to amend the 1971 WFH&B Act to Include protections for the National Parkland Wild Horses & Burros - after all, it was clearly the intent of the Act to protect all of our nations wild horses on their historic lands everywhere. This is what we must fight for,...to keep them wild and free and in viable numbers on their historic rangelands, ....the ROAM Act will "strike out" the "where found in 1971" provision of the WFH&B Act which will effectively divest them of their right to stay upon their historic rangelands. Is this the kind of protection we want for our National Herds? To allow them to be shuffeled off of their historic rangelands and into the hands of public and/or private individuals all across the country who will put them in long term holding pens and/or in zoo-like settings the stallions to be gelded and the mares given birth control? That is what the ROAM Act will allow!!

I would rather see them scattered around the country in zoo like settings as you say, then shipped off to slaughter. At least they might have a chance for a better life than slaughter gives them. I agree with you on the auction in this case. you cant just round them up and send them straight into auction. there needs to be time for them to adjust. And what happened to the Adoption program? I thought they could only auction them after attempts at adoption have failed.

I have been living in Vietnam highland for many years. People need horses for transportation there and they are too poor to buy a horse for each family. Elderly and food should be carried by human when neceesary. There is no road on the rocky mountains. Highlanders and I love horses. If you have problem with horse overpopulation and other countries have problems in need of horses, I am happy to help, voluntarily. Please, contact AnhMy Tran at atran6@yahoo.com. You can find my information on the Internet, too.

Are you kidding me?? I know people that work at this sales ring and had one hell of a time trying to round them up. Maybe US should open back up the slaughter laws of horses so that people wouldn't be dumping them in our National Park. Also I wouldn't pay 1,000's of dollars to send them to Canada from North Dakota.... PETA can suck a chub, and whoever wrote this article can go suck off a horse! EAT SHIT!!!!!!