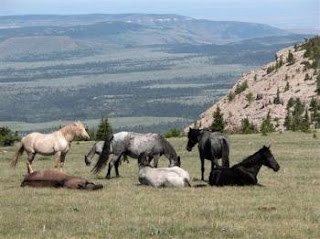 By SUSAN MONTOYA BRYAN – 11 hours ago

ALBUQUERQUE, N.M. (AP) — Conservationists are looking to the wife of Texas oil tycoon T. Boone Pickens to help push for federal reforms that they say will help thousands of wild horses and save rangeland in the West.

Madeleine Pickens recently announced plans to create a refuge for wild horses. She came up with the idea after hearing that the U.S. Bureau of Land Management was considering euthanizing some of the animals to control the herds and protect the range.

WildEarth Guardians wants to take Pickens' plan further by proposing a solution the group believes would resolve public land grazing conflicts that have resulted in the horses needing a home.

"Our proposal will not only benefit these animals where they currently live, but also enhance wildlife and watershed protection on federal public land," the group told Pickens in a letter sent Wednesday.

Pickens, who is negotiating the purchase of the land for her refuge, did not immediately respond to a request for comment.

WildEarth Guardians is advocating congressional legislation that would allow ranchers who have grazing permits on federal public land to relinquish the permits in exchange for compensation. The idea is that livestock would be removed from the allotment, leaving a refuge for wild horses and other native animals and plants.

Caren Cowan, executive director of the New Mexico Cattle Growers' Association, disagrees. She noted that agriculture, including ranching, is among the top economic drivers for New Mexico and that outsourcing food production by pushing ranchers from the land could have dangerous consequences.

"If we drive food production out locally, we're going to be depending on foreign food," she said.

Cowan said one concern surrounding the retirement of grazing permits is that wildlife would no longer have access to the supplemental feed and water that ranchers provide for their livestock on public land.

Another concern, she said, is that private land surrounding public grazing allotments would not be protected from development without ranchers who maintain the land for their agricultural operations.

Cowan said conservationists have pushed for years for permit buyout legislation. This time, she said, they are trying to ride a publicity wave created by Pickens' interest in the wild horses.

"It's also politically pragmatic," Salvo said. "It's a way to resolve grazing conflicts in a way that everybody can agree."

He said support by Pickens and other wild horse advocates would be invaluable to any effort to create a national permit buyout program.

The BLM estimates that 33,000 wild horses and burros roam the open range in 10 Western states. The agency wants that population to be about 27,000 to protect the herd, the range and other foraging animals.

Those horses that too old or considered unadoptable are sent to long-term holding facilities, and the BLM has said the cost of keeping animals in the facilities has caused them to consider euthanasia as a last resort.

Click on title to see article; http://www.google.com/hostednews/ap/article/ALeqM5iszK6sBNwf_ehrApMfw5bLD6zLqAD94OHG9G1
Posted by Mz.Many Names at 5:08 PM

Well at last! Here is an environmental group FOR the horses!
Hooray for EarthWild standing up for the wild horses!

It is the taxpayers of america that pays for the supplemental feed and most all of the rangeland improvements such as wells and piplines etc., so dont believe the hype about ranchers expenditures on the public ranges. It is a free ride all the way for them. It has always been this way.Whats worse, if the gov decides to revoke any of them, they must "make whole" the rancher at "fair market" (grazing) value, eventhough leased to him at less than 1/3 the going rate! Ranchers dont care about a few scraggly cows, its the value of the permits themselves that keep them in the cow business, whether they like it or not, they gotta have some on the range. No cows, no permits, no subs.
The argument that we need private cows grazing on public lands to feed our nation is a laugh when you consider that the ranchers grazing their beef on our public lands provide only about 2% of our nations meat.
If the truth be known, its the cows been ruining our rangelans for everybody and everything else. Its like the handful of "welfare ranchers" holding permits have a lock on our public lands. The grazing program administration fees cost taxpayers millions a year! And for what, to keep the 2% food supply going? No, its not really about cows, it about the grazing permits. Since some of them are transferable, they are a hot trading commodity today. The instant they are bestowed, the holders own personal property values go waaay up cause the permit means they have a vested interest in the alloted land. Geezum what do you make of the welfare ranchers using their grazing permits as colleradal on BIG loans. Banks dont mind at all. The banksters and brokers favor grazing permits second only to gold and percieve them as "future commodities" as speculating on public lands and what is to become of them (development?) when the cows are gone.