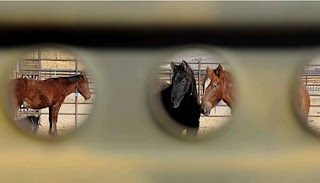 Wild horses have been living in the West for centuries, but their ever-growing numbers have led to many being fenced in. A recent government review of the cost of corralling them now has their admirers frantic that a slaughter is imminent.
The U.S. Bureau of Land Management (BLM) says slaughter remains a possibility for some of the more than 30,000 wild horses and burros being cared for in government-run pens.

A Government Accountability Office report issued last week lent support to the agency's assertion in June that the costs of caring for the animals have skyrocketed. The GAO said the agency should consider euthanizing some horses or selling them, likely to a slaughterhouse, as an alternative to keeping them in long-term holding pens for their entire lives.

"We don't want to do euthanasia … but we are up against the wall on our budget," says BLM spokesman Tom Gorey in Washington.

Gorey says the BLM needs no further authority from Congress to take the steps but has made no final decision. On Monday, agency Deputy Director Henri Bisson said the agency would make no decision this year.

Symbol of the Old West

Advocates for animals say a slaughter is unnecessary and an ignominious end for thousands of descendants of animals that arrived with Spanish conquistadors in the 16th century and who are living symbols of the nation's once-wild Western frontier.

"The GAO report has provided adequate cover for the BLM to begin euthanizing horses," says Jerry Reynoldson, head of Wild Horses 4 Ever.

Chris Heyde, deputy director and lobbyist for the Animal Welfare Institute, says his group hopes opposition to slaughter in Congress and a sympathetic Obama administration will cause the BLM to drop euthanasia and slaughter sales.

A 1971 law gives the BLM the authority to euthanize animals to manage herds in designated areas. The agency calculates that land set aside for the animals across the West can support 27,500 horses, with more than 16,000 of them in Nevada. There are 33,100 wild horses and burros in 199 herds across 10 Western states, the GAO report said.

To keep the horses from starving to death or from crowding out other species, the BLM uses low-flying helicopters each year to corral enough horses to keep the herds at target populations.

Those horses basically live out their lives in large pens, some for 20 years or more. Today 33,088 horses are being fed and maintained by taxpayers, just as many as roam in the wild.

The GAO report said that rising costs of feed and transportation, combined with lower interest in adopting the wild horses by the public, are pressuring the program.

The BLM offers the horses for $125 to people with the means to care for them, but the number of adoptions has been falling. Last year, 4,772 wild horses were adopted, half the number in 1995, and the number was far outpaced by the 7,726 horses removed from the range in fiscal 2007.

Takes a lot of hay to manage herds

Critics accuse the agency of mismanaging the horse program and say the roundup is only made necessary because the BLM favors cattle ranching over wild animals in the competition for water and graze land.

"This isn't the way to do things," says Dawn Lappin, a leader of Wild Horse Organized Assistance, a Nevada group that aids horses.

The critics demand the BLM do more to have horses adopted; the agency says that is not realistic.

After being passed up for adoption three times, horses are sent to long-term holding pens where they may live to as old as 25, far longer than they would in the wild, BLM spokeswoman Celia Boddington says.

"As horses get older, they are extremely challenging if not impossible to gentle," she says.

In the wild, the horses reproduce at a rate high enough to double the herd in four or five years, the BLM says. With drought conditions in parts of the West, the agency says it cannot allow the herds to grow unchecked.

"That would be an environmental disaster," Boddington says.

Advocates say that if horses were allowed access to more land and water, more of them could survive.

Deanne Stillman, author of the recently published book Mustang: The Saga of the Wild Horse in the American West, says there are 3 million to 4 million cattle on Western public lands.

"It seems peculiar that our public lands can support that many cattle, but there's a problem with 20-some thousand wild horses," she says.

Boddington says the BLM must consider the entire nation in managing the land of the public. "Conservation, mining, oil and gas, grazing, forestry, recreation — it's very difficult to balance all those interests," she says.

See USA Today Article, and place to leave comments by clicking on title above;