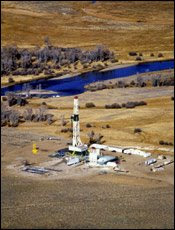 What is the Bush administration's plan for the public lands of the West?

If the Bush administration has its way, natural gas rigs -- like this one in Wyoming's Upper Green River Valley -- will sprout across the West's open spaces.
Photo © Lloyd Dorsey/Wyoming Wildlife Federation

Since its inception, the Bush administration has been determined to give the energy industry the rights to drill for oil and gas in as many of America's public lands as it can, including our most beautiful, remote and sensitive lands. Now that the administration's end is in sight, federal officials across the West are redoubling their efforts to lease these areas for oil and gas development and to approve permits to drill them, virtually guaranteeing the industrialization of millions of acres of previously wild and open land. Already, almost 26 million acres of these lands have been leased and tens of thousands of wells have been drilled. The dense web of power lines, pipelines, waste pits, roads and processing plants springing up across the West is driving elk, sage grouse, deer and other wildlife from their native ranges. Meanwhile, polluting haze from new industrial activities has significantly impaired visibility in many parts of the West. Things will get even worse if the Bush administration has its way and approves even more drilling in its remaining days -- and the impacts on the wide open spaces of the West are sure to be dramatic and irreversible.

Click on title above for ful article;
http://www.nrdc.org/land/use/qwest.asp
Posted by Mz.Many Names at 5:25 PM