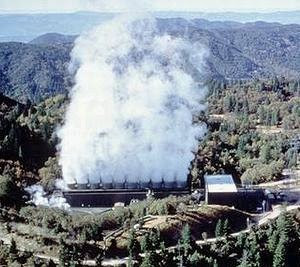 "Geothermal energy will play a key role in powering America's energy future," Kempthorne said, "and 90 percent of our nation's geothermal resources are found on federal lands."

The plan would identify about 118 million acres of public lands managed by the Bureau of Land Management and 79 million acres of National Forest Service lands for future geothermal leasing.

"Facilitating their leasing and development under environmentally sound regulations is crucial to supplying the secure, clean energy American homes and businesses need," the secretary said in Phoenix where he has been attending the annual convention of the National Congress of American Indians.

There are 29 geothermal power plants currently operating on Bureau of Land Management lands in California, Nevada and Utah, with a total generating capacity of 1,250 megawatts, enough to supply the electricity needs of 1.2 million homes.

Under the plan announced today, known as the Final Geothermal Programmatic Environmental Impact Statement, 5,540 megawatts of new electric generation capacity from geothermal resources could be in place by 2015.

An August 2007 sale drew the highest ever per-acre bid for a lease in The Geysers field. And a sale of leases in Nevada brought a record-breaking $28.2 million in August 2008.

Kempthorne noted the strong interest states, local communities, industry and environmental groups took in the development of this plan.

"This process has benefited greatly from the involvement of both governmental and nongovernmental stakeholders, and from the clear direction Congress gave in the 2005 Energy Policy Act," the secretary said.

Geothermal resources range from heat found just under the ground to hot water and rock miles below the Earth's surface. Wells over a mile deep can be drilled into underground reservoirs to tap steam and very hot water that can be brought to the surface to generate electricity.

To resolve these concerns, geothermal plants can be built with systems that can inject these substances back into the Earth, reducing carbon emissions to less than 0.1 percent of those from fossil fuel power plants.

Hot water from geothermal sources will contain trace amounts of toxics such as mercury and arsenic, which if discharged into rivers can make the water unsafe to drink.

Lands closed to geothermal leasing will remain closed. Lands within a unit of the National Park System, such as Yellowstone National Park, for instance,will continue to be unavailable for leasing. The plan also excludes wilderness areas and wilderness study areas from geothermal development.

The Forest Service will use information in the plan to facilitate leasing analysis to determine whether or not geothermal leasing is appropriate and to evaluate its land use plans and amend them as needed through a separate environmental review process.

These leases were filed before January 1, 2005 for specific lands in Alaska, California, Nevada, Oregon and Washington managed by the Forest Service or the Bureau of Land Management. Decisions on these 19 leases could proceed as soon as the Record of Decision is signed on the Final Geothermal Programmatic Environmental Impact Statement.

The Bureau of Land Management and the U.S. Forest Service will publish the final version of the plan in the Federal Register on Friday, October 24, 2008. It will be available online at http://www.blm.gov/Geothermal_EIS.

The governors of the 12 states in the plan's project area each will have the opportunity to review the final document to ensure consistency with state plans, programs, and policies.

The Bureau of Land Management will wait until the end of the Governor's consistency review period before signing and issuing the Record of Decision approving the land use plan amendments. Kempthorne says any inconsistencies will be resolved before a Record of Decision is issued.