The "Other" Pickins Plan 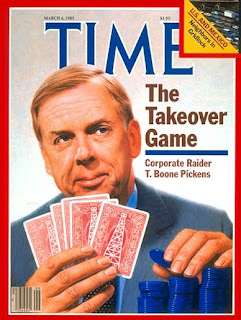 T. Boone Behind the Push to Remove Wild Horses off of Public Lands?

Calls for increased exploration of gas, oil and wind

T. Boone to wife; "You can have the horsies honey, (as long as it dosent cost us anything) and I'll take the land and everything that comes out of it."

More Boone for the buck
By Gabby Hutchings And Valerie Pritchard


OSU students and Stillwater residents gathered in Gallagher-Iba Area Thursday to hear Boone Pickens speak about his strategy to make America less dependant on foreign oil and more dependant on domestic energies. Pickens’ fifteenth town hall meeting drew a record crowd of 4,300 people from his alma mater and the city.


The audience stands as the OSU ROTC colorguard marches the national and state flags into Gallagher-Iba Area in preparation for Boone Pickens’ town hall speech about his plan to free America from its energy crisis. His plan includes heavy investment in wind power, utilizing natural gas and creating a new electrical transmission grid.

Boone Pickens discussed how students and the university can be more energy efficient. Also, he said he predicts will be a leader in energy technology.

Pickens on talk with Obama White House Chief of Staff

Boone Pickens discussed a conversation he had with Rahm Emanuel, White House Chief of Staff.

(Bloggers Note: Borens is a staunch and vocal pro-horse slaughter supporter;click on title above to read more on that relationship;
http://wildhorsewarriors.blogspot.com/2009/11/borens-calls-anti-horse-slaughter-folk.html)

Political party not an issue in energy debate

At press conference, Pickens says it has been a good two years

After the town hall meeting, Boone Pickens met with members of the media and journalism students to discuss the Pickens Plan along with other energy-related topics.

The man with a plan told Oklahomans on Thursday at a town hall meeting that America has to reduce its dependency on foreign oil.

“The U.S. is addicted to foreign oil, and we’ve got to get our necks out of the noose,” said Boone Pickens at his town hall meeting Thursday at Gallagher-Iba Arena.

In Pickens’ fifteenth town hall meeting nationwide, OSU had the largest turnout with a crowd of 4,300 people.

“Today we’re importing 67 percent of our oil,” Pickens said. “If we don’t do anything in 10 years, we’ll be importing 75 percent and paying $300 a barrel for oil. We won’t have health care or education because there won’t be anything to go to those. This has nothing to do with politics; it’s about us. It’s our problem, and we’ve got to solve it.”

Pickens stressed the non-partisanship of the Pickens Plan and reached out to people on both sides of the political aisle.

“There’s not a Democrat or Republican angle to anything I’m talking about,” Pickens said.

The U.S. Congress is considering two bills, one in the House and one in the Senate, which would switch 6.5 million heavy-duty vehicles to natural gas. Pickens has supported this idea in his plan and sees it as the first step to the United States becoming energy independent.

Pickens encouraged Oklahomans to use the resources that are available in the United States.

“Natural gas is 50 percent cleaner, a dollar a gallon cheaper, and it’s ours,” Pickens said. “That’s the key — it’s ours. We have over 350 billion barrels of natural gas. That’s more than the Saudis have.”

The second tenet of the Pickens Plan is for the United States to use its wind power to generate energy, further distancing itself from dependence on foreign countries.

“No country in the world is importing 67 percent of its oil and most of the countries don’t like us,” Pickens said. “How could we get ourselves into a spot where we’re depending on our enemies? Wind is going to happen in this country.”

Oklahoma is working to use wind as a viable source of energy for the state and hopes to expand to eventually service the whole country. Oklahoma has a team of researchers working on the Oklahoma Wind Power Initiative to set up wind farms statewide.

“We hope as we get big lines of wind turbines we can take our energy to other states, which would generate money into our economy,” said OWPI Co-director Stephen Stadler. “We want to have 20 percent of our energy from wind power by 2030.”

Oklahoma has seven wind farms and more are being built, Stadler said, who is also a geology professor at OSU. The state’s first wind farm, the Oklahoma Wind Energy Center near Woodward, was built in 2003, according to www.ompa.com. Stadler said one farm can generate energy for a couple thousand homes.

Pickens promised that OSU would not be left behind as the changes in energy take place. He said OSU can do its part to reduce energy consumption by getting rid of cars on campus, an effort that is included in the university’s master plan.

“There’s not going to be anyone who’s going to get ahead of OSU,” Pickens said. “We’ll be in the game, I can promise you that.”

What is the Pickens Plan?

The Pickens Plan is an effort to reduce America’s reliance on foreign oil.


Pickens often says the use of foreign oil could potentially leave the United States crippled in the event of a conflict in a country like Saudi Arabia.


To reduce the risk of such a scenario, the plan proposes that the U.S. use energy methods that are within its means to create and use without foreign dependence.


There are several basic pillars to the Pickens Plan listed on
www.pickensplan.com:

* Create millions of new jobs by building out the capacity to generate up to 22 percent of our electricity from wind. And adding to that with additional solar generation capacity
* Building a 21st-century backbone electrical transmission grid
* Providing incentives for homeowners and the owners of commercial buildings to upgrade their insulation and other energy saving options
* Using America’s natural gas to replace imported oil as a transportation fuel in addition to its other uses in power generation, chemicals, etc.

Through these methods, the Pickens Plan hopes to create more stable and worthwhile sources of energy for the U.S. For more information about the Pickens Plan or to join the cause, go to www.pickensplan.com.

Bandwagon Patriot
Sat Oct 31 2009 17:53
Yeah! Let's listen to this rich billionaire who got us into this mess to begin with!