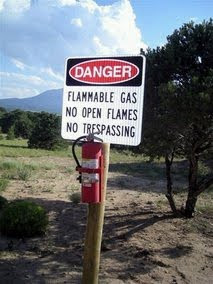 WALSENBURG, Colo. – Bernice and Jerry Angely like to show visitors the singed T-shirt a friend was wearing when their water well exploded and shot flames 30 feet high.

The friend wasn't hurt. But that and an explosion at another home weeks earlier forced Colorado to suspend natural gas drilling around this southern plains town until someone could find out why dangerous levels of methane were getting into the groundwater.

Two years later, Walsenburg and surrounding Huerfano County are still waiting, its residents caught in a collision between two of the West's vital resources: Water and natural gas.

"The water is so saturated with methane and other chemicals it is not to be used for human consumption," said Bernice Angely, who's had water trucked to her home 10 miles west of town since her well blew up in July 2007.

Petroglyph Energy Inc., a Boise, Idaho-based firm that has worked the rolling plains of the Raton Basin since 1999, suspended drilling until it can stem the methane. Colorado also is rewriting rules that had allowed Petroglyph to discharge water runoff from its drilling into streams and creeks.

But Petroglyph says it's not clear the drilling caused the methane leaks or prompted other area water wells to run dry. Eying what it calls an extremely promising natural gas field, it believes a shallow water formation tapped by area homeowners isn't connected to a deeper one pumped by the company for its drilling operations.

Petroglyph chief operating officer Paul Powell also believes a growing number of new homes in the area could explain some of the dry water wells.

"We'll do what we need to do," Powell said, stressing that his firm is working with the state on a solution.

Petroglyph has a plan to prevent the flow of methane into water wells by creating a hydraulic barrier. The company has proposed pumping water from an underground formation and injecting it into a row of wells where gas drilling occurs. Powell said gas will migrate into a void, and "if the void is full of water, there isn't room for gas to migrate through it."

State regulators say the plan is plausible but that Petroglyph needs to prove it works. Democratic U.S. Rep. John Salazar, who farms in the nearby San Luis Valley, has asked the U.S. Geological Survey to weigh in by evaluating the area's water quality and formations to determine if the gas drilling is to blame for the problems.

Water coursing through porous rock and streams has allowed farming, ranching and new subdivisions to thrive in the semiarid area about 160 miles south of Denver.

It also helps trap methane gas in the vast coal seams that once made the area a mining hot spot. The coal mines are gone, but the methane that made digging for it dangerous is a valuable resource. Companies like Petroglyph pump huge volumes of water out of the ground to relieve the pressure trapping the natural gas.

Steve Gunderson, director of Colorado's water quality control division, said Petroglyph will have to build a water treatment plant before it gets a new permit to discharge water. The old permit allowed Petroglyph to release up to 8 million gallons of water daily.

Fourth-generation dairy farmer Brett Corsentino blames the discharges into the Cucharas River for ruining his corn crops. He uses river water to irrigate his crops just a few miles east of the homeowners having problems with their wells. He says the high levels of sodium in the wastewater has diminished his soil's ability to absorb water and stunted the corn's growth.

"They say, `Well, there's no proof,'" Corsentino said. "Well, we'd been getting along for generations just fine until they started pumping 8 million gallons out of this country."

Corsentino also says his herd suffered abnormally high birth and death rates and now numbers 400, down from 650. He believes the cows consumed too much sodium from the water and corn grown from it. His corn used to produce 6,000 tons of silage; this year's crop yielded 1,500 tons.

However, Corsentino says his herd is healthier and milk production has increased since drilling stopped.

Petroglyph paid for soil tests on Corsentino's farm. They showed high levels of sodium but that it also needed more calcium, Powell said. Petroglyph and Corsentino are discussing possible treatments.

"We still don't believe we have liability for the situation," Powell said. "But we were willing to help him fix his land and get back to productivity."

Ten miles west of Walsenburg, a rushing sound emanates from a pipe that vents methane from Ben and Melanie Bounds' water well. The pipe was installed after a June 2007 explosion blew off a shed roof covering the well.

The Bounds had moved from Dallas to build what they call their dream home atop a hill with a breathtaking view of the Spanish Peaks. They say their problems started when Petroglyph began drilling nearby. They're suing the company and haul water from town to their cistern.

"If I could run the clock back, we'd have never tried this," Ben Bounds said.

"I had more methane coming out of my water well than they had out of any of their gas wells. It sounded like a locomotive going down the road," said Kent Smith, who also has a methane detector in his house. "The damage and the problems they've caused have got to be addressed, and they keep getting pushed aside and forgotten about."

Petroglyph insists it's a good neighbor. Despite the methane mystery, it's trucking water to 14 area homes and has supplied 15 homes with methane alarm systems.