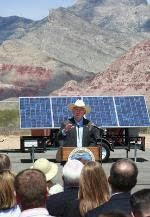 With Red Rock Canyon as a backdrop, Interior Secretary Ken Salazar on Saturday announces a plan that will provide $26.4 million in stimulus funds this year for more than 40 Nevada projects.
Photo by Marlene Karas/Review-Journal


Interior Secretary Ken Salazar launched a plan Saturday to spend $305 million for creating jobs on what he called the public lands' "renewable energy frontier" to reduce the nation's dependence on foreign oil while at the same time restoring landscapes and wildlife habitat.

Standing in a sun-drenched parking lot at Red Rock Canyon's fire station with a solar panel behind him, Salazar said Senate Majority Leader Harry Reid "really believes that Nevada is going to be at the point of the spear in terms of moving this country forward with a whole new renewable energy agenda."

"That work we will do here on solar and geothermal and wind energy is going to be exemplary for the rest of the nation as we take the moonshot on the new energy frontier and tackle the realities of climate change," Salazar said.
The Interior Department will manage $3 billion in investments under the American Recovery and Reinvestment Act signed by President Barack Obama. The president's goal is to invest $150 billion over the next decade to speed up renewable energy development.

Bureau of Land Management stimulus funding in Nevada this year will provide $26.4 million for more than 40 projects, including renewable energy, habitat restoration, and building and restoring roads, bridges and trails.

Salazar said the monies are "going to create jobs to get our economy out of the ditch. And second of all, we're going to invest in projects that are going to bring out long-term sustainability to these assets of America and to the initiatives we have."

The Obama administration aims to have 10 percent of the nation's electricity generated from renewable resources by 2012 and 25 percent by 2025.

In all, $41 million authorized under the stimulus act will be spent on 65 BLM projects to spur large-scale production of solar, wind and geothermal energy, in addition to siting transmission lines on public lands to support renewable energy development.

After his announcement to a gathering of BLM employees, conservationists, some local officials and members of the Las Vegas Paiute Tribe, Salazar said he met early Saturday with representatives from more than a dozen solar companies.

He said they have financing for many projects in Nevada, Arizona, California, New Mexico, Utah and Colorado, "and they want to get moving on those projects" but the BLM has a backlog for processing applications.

There are 241 applications for wind projects and 199 for solar projects that are in various stages of processing.

Groundbreaking on some of those projects will occur next year, he said.

"So we are putting the pedal to the metal to get it done," he said.

"I think there are literally millions of jobs that can be created around the country with respect to renewable energy," he said.

"Overall what we expect from the Department of Interior is somewhere in the neighborhood of 100,000 jobs around the country with the total investment we're making," he said.

As part of the $305 million for BLM recovery investments, 650 projects across the nation will restore landscapes and watersheds, protect wildlife habitat, spur renewable energy development, and clean up abandoned mining sites.

Contact Review-Journal reporter Keith Rogers at krogers@reviewjournal.com or 702-383-0308.
Posted by Mz.Many Names at 10:22 AM