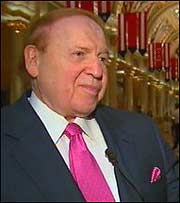 Tax the Rich - Feed the Poor - Save the Wild Horses (and burros) It is only the right thing to do!

VEGAS (AP) -- Billionaire Sheldon Adelson was paid $5.58 million in 2009 as the chairman and chief executive of casino-resort developer Las Vegas Sands Corp., according to an Associated Press analysis of a regulatory filing Friday.

Adelson's pay package last year included a $1 million salary and $2.73 million in perks -- including $2.45 million for security for Adelson and his immediate family. Adelson's pay compares with $1.28 million last year, but last year's executive compensation report did not include roughly $2.1 million for similar security.

Sands, which owns casino-resorts in Las Vegas and Macau and is close to opening a new property in Singapore, said the security costs for previous years were reported in a different section of its report.

The Associated Press formula is designed to isolate the value the company's board placed on the executive's total compensation package during the last fiscal year. It includes salary, bonus, performance-related bonuses, perks, above-market returns on deferred compensation and the estimated value of stock options and awards granted during the year. The calculations don't include changes in the present value of pension benefits, making the AP total different in most cases than the total reported by companies to the Securities and Exchange Commission.