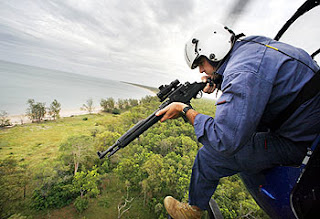 As if the 2000 mass execution of our heritage horse, The Brumby at Guy Fawkes National Park was an international disgrace, the then NSW Minister For Environment, Bob (Devious) Debus, with egg on his face, stated – “there will be no more shooting of the Brumby”. Read our coverage of the Guy Fawkes Brumby Killing Field – HERE.

With horses being shot mutable times, left to die by so-called sharp shooters from the Feral Animal Aerial Shooting Team (FAAST) in helicopters, all sanctioned by the RSPCA, who under a barrage of irrefutable evidence only managed to prosecute the NSW National Parks for the death of ONE HORSE, according to the then senior inspector and now CEO, Steve Coleman.

Now we have this FAAST mob, known and proven as incapable of humane shooting from helicopters, are to be joined by the NSW Police snipers, who have zero experience with helicopter shooting at moving targets, last month with government and National Parks at a covert meeting drafted a plan for a joint execution of brumbies, pigs, COWS and goats in NSW National Parks.

The predominant missing feral animal, which needs to be exterminated, is the packs of wild dogs, who roam unchecked in these parks by their multiple hundreds, who have not only ripped to pieces our native animals, but venture from this government dog pound on to farmers properties to mutilate and kill his livestock, a multi-million dollar loss annually to this nations exports.

The ratbag Rambo we exposed in the Snowy, randomly shooting horses and cattle, may now be joined by the cops and bunglers in gunships.

Read the story published in the Sunday Telegraph July 5th 2009 to sample the unbelievable lengths that the greenie backed extermination of the Brumby will go to.

Do not be swayed by the denial and spin from the DSE of nothing happening, with our Snowy Mountain Parks closed for the winter to we the people and rightful owners of these lands by government public servants. We most likely “will not see” these snipers, grappling with the weight of their announced use of the .50 caliber super high powered rifle, as they bounce around inside the gunship on a mission of humane target practice. 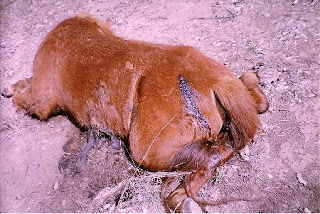 Pictured above is this Brumby shot, from a helicopter by government sanctioned expert shooters, in the back, and twice in the stomach. Its intestine you can see oozing out on the ground, it died in agony. Where were the RSPCA Inspectors when this was going on, the incident published all around the world?

POLICE snipers could be granted a license to kill feral animals in national parks for target practice.

FAAST committee executive officer Ben Russell said asked to take part in the training exercise at the next available opportunity.

“They were interested to see what we do and they wanted to come along to compare what we do, against their own sniper training.”

“Mr Russell said the department hoped to have several officers to take part in the next mission.

“We are going to organise for a couple of their guys to come along, but nothing has been arranged yet”, he said.

The training deal would challenge to aim for moving targets from the air, rather than motionless dummies or paper targets.

Despite the talks, a police spokesman said no formal decision on the exercise had yet been made.

Once marksmen are airborne, under the plan, it is understood that they would aim to kill the animal in the most humane way possible.

The culls are normally supervised by police and co-ordinated to minimise environmental damage.

High-powered rifles, including the mammoth .50 caliber stealth rifle used in sniper training, would be used.

Aside from the shooters, the helicopter would also carry the sniper’s partner and spotter.

The spotter would help find the animals and record locations, along with a number of shootings.

Police confirmed that a memorandum of understanding had been signed by senior officials, but a spokesman denied that the arial shooting exercise would go ahead.

A Department of Environment and Climate Change spokesman denied that police would take part in culling.


Click on title above to go to original article;
http://www.sosnews.org/newsfront/?p=383
Posted by Mz.Many Names at 11:17 AM