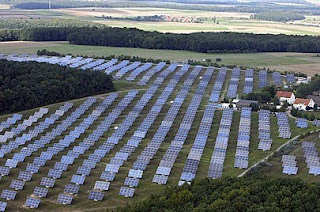 Brian Brown, a founding member of the Amargosa Conservancy, expressed fears over the cumulative impact of numerous solar power plants that might turn the Mojave Desert into an industrial park.

During a talk at the Amargosa Valley Community Center Friday night, Brown questioned whether it's the best use of public lands.

"Solar energy has caused a lot of consternation within the environmental community because 10 years ago, probably every person who said they were an environmentalist would have said solar energy is great, we should have all the solar energy we need," Brown said.

"But now people who live in the desert, who say they are environmentalists, when these plants are going to be plunked around them in their community, say 'Whoa, wait a minute. That's not what I meant. I don't want to live next to a big, electrical, generating facility. It's ugly.'"

Brown spoke to a handful of people to brief them about questions to ask the U.S. Bureau of Land Management, before decisions are made that will determine how the desert looks in the next 100 years.

One of those who showed up was Don Reid, senior project development advisor for Solar Millenium, a company planning to build two, 232-megawatt solar plants in Amargosa Valley.

Brown suggested, "There are other uses public land could be used for. A lot of people think the desert is pretty nice as a desert -- why don't we leave it like this?"

He said there's a lot of unused farmland in the California desert available to renewable energy companies, much of it private property, where people attempted to raise crops but quit.

Brown also endorsed a concept called "distributive energy," or generating electricity where it's being used. He said the government, instead of subsidizing solar power plants, could look at making solar panels more affordable to the homeowner.

"If the load centers, where they need the electricity, are Las Vegas and Los Angeles and places where there is a big load, a big demand for it, why don't you build it there instead of coming out to remote areas or undisturbed public land, scraping it clean, then piping electricity or wiring it and shipping it for 70 or 80 miles?" Brown asked.

"Imagine every Walmart parking lot covered with shade," he said. "On top of it you just put solar panels, and every mall parking lot and every piece of asphalt and everybody's home, you could put that over it and you generate electricity."

The result could be "thousands of miles of photovoltaic panels. Everyone would get to look at them and share the view instead of just the folks in just a few desert communities," Brown said.

Brown said permitting for some of the solar projects on the fast track, like Solar Millenium, is being rushed through the process required under the National Environmental Policy Act. A groundbreaking in 2010 will allow companies to be eligible for loan guarantees under the stimulus package.

Reid, however, said companies have to go through a very rigorous, environmental review by the BLM.

Brown read a newspaper article saying the Department of Energy offered Bright Source Energy a $1.37 billion loan guarantee to construct the 392-megawatt Ivanpah solar generating electrical plant. Brown said that removes any financial risk by guaranteeing the lender will get their money back if the project goes to pieces.

"The reason this deadline is approaching so quick is because the government wants to create jobs and they want to get people working. A typical example: We're going to hire 1,300 construction workers for about four years," Reid said. "Manufacturing is going to follow. That's the whole idea."

In what he called "a worst-case scenario," Brown said the conservancy counted applications for renewable energy projects in Amargosa Valley on 118,000 acres of federal land.

But local resident John Bosta said some of the applications have been terminated because the solar companies haven't submitted a plan of development to the U.S. Bureau of Land Management.

Utilities like NV Energy are also required to obtain 25 percent of their power from renewable energy by 2025.

Brown said renewable energy companies applied for over 1 million acres of public land from the California desert to the Mexican border.

"That's significant. If you remove 1 million acres of public land for anything, that's going to make an impact on the people and the plants and the animals," he said.

The BLM identified up to 106,000 acres of proposed, renewable energy projects in Amargosa Valley.

New transmission lines will be needed across the desert, Brown said, noting Pacific Solar will extend a power line 22 miles to a substation near the Nevada Test Site.

Brown pointed out the Pacific Solar project would only employ a few permanent workers.

"The final impact on the economy might not be as big as you might believe. A big concern for all of us here is the possible increase in water supplies depending on the technology used. Wet cooling we, the Amargosa Conservancy feel, just cannot support that," he said.

Brown reminded the few Amargosa Valley residents in attendance that the leases being signed for these projects are for 50 years.

"As your valley grows, people will come in, there will be human needs. There will be the needs of industry and the dairy perhaps and the Ash Meadows refuge. So jockeying for who gets to use the limited amount of water for what is going to be a very, very important question, and it's something that's going to have to be looked at in the long term," Brown said.

Reid countered that Solar Millenium will only use 2 percent of the annual recharge in the Amargosa Desert hydrographic basin.

"When you look out, if you see new transmission lines or you see miles and acres of mirrors and panels, they change the 'view shed,'" said Brown. "Some people are offended by that, some people are not," he said.

I like the idea of dispersed energy. No need for big centralized generation - too big to fail - and loss of energy as it's shipped over transmission lines.