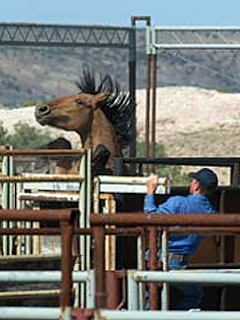 By Robert A. WINKLER
The Desert Independent

FALLON, Nevada – Americans are wondering what BLM is hiding? What are they doing as they process nearly 1900 illegally caught wild horses in Nevada that they don’t want the public, the horses owners, to see?

The Bureau of Land Managements (BLM) has placed severe limitations on the viewing of the wild horses captured in the controversial Calico Wild Horse roundup. Despite the enormous cost to the American taxpayers and the controversial nature of the roundup, the BLM and the Department of Interior (DOI) are denying requests for independent humane observers during the processing of nearly 1900 mustangs over the next few months in preparation for their long term holding or adoption. During this dangerous time for the mustangs, the public is being denied an opportunity to view BLM running the animals through alleyways and into chutes where they will be freeze-branded, inoculated and neck-tagged.

“I’ve been watching the processing of mustangs on and off for 15 years. What is the big deal this time?” Asks Ginger Kathrens, Volunteer Executive Director of the Cloud Foundation, “There’s something very wrong when it’s easier to crash a party at the White House than go view our wild horses being freeze-branded in Nevada. Makes you wonder if there’s something to hide out in Fallon?”

To date over a countless horses have died as the result of the roundup. This does not include the 30 plus mares that have aborted their late-term foals in the feedlot style corrals in Fallon, Nevada. The 4% death rate is over eight times the BLM expected level for a helicopter roundup. Foals are now being born in the pens and the public is not permitted to confirm young, sick and old animals are being humanely treated in a timely fashion.

The BLM claims that the shut down of the facility is a safety issue. However, due to the high level of public interest, we are sure they could find a way to make it safe for observers. It would seem that they just are not interested in having the public see the cruelty they are inflicting on a day-by-day basis.

Despite Wild Horse and Burro Chief Don Glenn’s promise that the public is welcome “anytime” to view the roundups, the BLM conducted the Calico roundup with limited access. Now BLM has repeatedly denied official requests from the Cloud Foundation and others to allow even two members of the public to be present during processing of horses which began February 15. Ed Roberson, Assistant Director, Renewable Resources and Planning with the DOI told The Cloud Foundation in an email last week not to worry about the horses.”

Meanwhile the captured Calico wild horses, many still with swollen joints and injuries from being run over sharp volcanic rock by helicopters, stand in pens without windbreaks. “Topography credited by the BLM as a natural wind break is a joke. I’ve been to Fallon and I’ve seen the conditions these horses are exposed to, no cover, no windbreaks except for some of the ‘hospital’ pens”, explains Terri Farley.

According to Wild Horse and Burro Chief, Don Glenn, the facility is charging the government around $5.75 per day/per horse. That amounts to over $10,000 taxpayer dollars per day to house the mustangs. The cost of the Calico roundup alone was at least $1 million and holding of horses will cost taxpayers additional millions.

While nearly 2,000 Calico mustangs languish and die in Fallon, thousands of privately-owned cattle still graze the Calico wild horse herd areas, bringing in revenues to the BLM of around $40,000 per year. The GAO reported that yearly revenues from the national public lands grazing program are $21 million per year, while the costs to administer the grazing program are $144 million per year, resulting in a yearly loss to the American taxpayer of $123 million. This taxpayer subsidized grazing program is often referred to as “welfare ranching” due to the small fees charged to livestock permittees. The rate is currently the lowest allowed by law, $1.35 per cow/calf pair per month.

There you have it. Get rid of the horses to make room for cattle. Run healthy horses into the ground, to death. Kill the young. Separate family groups of horses. Drive them with fear. All for the money that talks, the cattle and ranch industry. Robert Winkler, Publisher


Click on title above for original article;
http://www.thedesertinde.com/BLM%20Denies%20Public%20Access_0328.html
Posted by Mz.Many Names at 12:18 PM