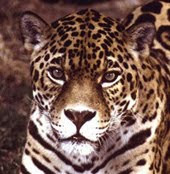 Of Course, Protecting the Preditors AFTER the Wild Horses and Burros are gone is a bit idiotic and .....ironic. One of the excuses the BLM likes to use for the so-called "overpopulation" of wild equines, is that there are no preditors to keep their numbers down.....that is because the BLM and the USDA have been killing them vigilantly over the years to keep the welfare ranchers cows safe.......get ready for more taxpayer monie to get spent reimbursing the ranchers for the dead animals they will claim were killed by the jags. Another way for the welfare ranchers to make money from the taxpayers and for the govt to make monie also thru sales of BIG CAT HUNTING PERMITS. So you see, the ranchers are happy, the gov is happy, .....while our nations wild horses and burros are going going going and will soon be gone.
I say PROTECT the wild equines as the WFHBA of 1971 intended, as principal users of their historic lands.

After a decade-long fight for the survival of jaguars in the United States, the Center for Biological Diversity won a court ruling last year to protect North America's largest native big cat. Now, in response to the Center's extensive litigation, the Fish and Wildlife Service has announced it will designate critical habitat for the jaguar. This is excellent news for the endangered big cat -- but the question of where the jaguar's critical habitat will be located remains unanswered.

The Center is proposing the Sky Islands and Gila headwaters/Mogollon Rim regions of Arizona and New Mexico be designated as jaguar critical habitat vital to the recovery of the species. Parts of southeastern New Mexico, West Texas, and Southern California should also be included in the designation.

Please submit comments in support of the Center's proposal to designate critical habitat for the endangered jaguar by Monday, March 15. Your email, with personal touches added to reflect specific places you want to highlight, will help convince the U.S. Fish and Wildlife Service to take a "can-do" attitude toward conserving the lands necessary for jaguar recovery in the United States.


Click on title above to find out more and take action.

Please designate critical habitat for jaguars throughout the entirety of the Sky Islands and the Gila/Mogollon Rim regions of Arizona and New Mexico.

I also support critical habitat for jaguars in portions of other regions such as southeastern New Mexico, West Texas, and Southern California.

The Sky Islands ecosystem consists of isolated mountain ranges that have long been inhabited by jaguars. As recently as last March, jaguar "Macho B" was known to live and roam in the Pajarito, Atascosa, Tumacacori, and Baboquivari Mountains. Other jaguars have been confirmed in the Chiricahua, Peloncillo, and Animas Mountains. These and other sky islands, along with the desert lands between them, have been identified by the Jaguar Conservation Team as potential jaguar habitat, providing habitat for jaguar prey such as deer and javelina.

Please also designate the Gila National Forest in New Mexico and the Mogollon Rim in Arizona, along with adjoining lands, as critical habitat. These uplands with vast coniferous forests supporting deer, elk, and javelina were home to the last known female jaguar and possible jaguar reproduction up till the 1960s. The Gila and Mogollon Rim were also identified as potential jaguar habitat by the Jaguar Conservation Team.

Other undeveloped areas in southeastern New Mexico, West Texas, and Southern California should also be designated as critical habitat for jaguars.

Thank you for your consideration.

Donate now to support our work.


This message was sent to qarr@nycap.rr.com.


The Center for Biological Diversity sends newsletters and action alerts through DemocracyinAction.org. Let us know if you'd like to change your email list preferences or stop receiving action alerts and newsletters from us. Change your address or review your profile here.