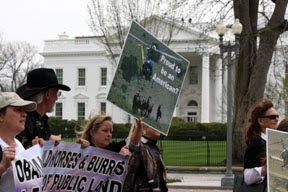 WASHINGTON - Protesters gathered in front of the White House as President Obama spoke in support of health care at a packed house at the University of Iowa today.

The protesters were met with armed guards when they reached the U.S. Department of Interior. One protester reported back to supporters of the end of federal Bureau of Land Management roundups.

"We congregated at Layfayette Park and there was a podium with microphone and speakers," said a wp,and wjp declined to be identified. "Ginger Kathrens, RT Fitch, Nancy Perry from the Humane Society of the United States, John Holland if the Equine Welfare Alliance, Elyse Gardner, James the film producer, Rob, a BLM volunteer who is very much on our side, and Craig Downer, spoke to the crowd.

"There were about 100 people at the rally," she reported. "After the speeches, we walked to the Department of Interior with our signs and we chanted slogans like 'tell the truth' wild and free let them be, no Salazoos."

But the peaceful protesters were met with force when they reached the office of Interior Secretary Ken Salazar.

"We were met by several armed police officers standing at the top of the steps with their guns in their holsters. More police on foot came to the DOI, a policeman on a motorcycle and then 4 mounted police officers stood in a line across the street where there is a park. I couldn't believe that they felt so threatened."


Anger and frustration were at American horse lovers being treate like foreign terrorists were voiced by those who marched.

"It was pretty amazing and shocking that Salazar and company called out essentially the National Guard," a protester told Horseback Online. "All they needed were RPGs and Armed Personnel Carriers to complete the military style posse."

A Washington area protester was nostalgic about the DC of old and the Department of Interior structure..

"This imposing building hides all of the secrets, deception and the selling out of our public land to special mining interest. The figures were standing by the large windows on the upper floors looking down on us and we crossed the street to the park so we could stand in front of the horses of the mounted police. Their silence was deafening despite gestures to start a conversation with them."

(BLOGGERS NOTE: Just like the Buckingham Palace Guards,...only THEY are not armed.)
Posted by Mz.Many Names at 1:18 PM

It's the typical psychopath ploy - once the lies are exposed, they'll try every manipulative trick in the book to shift blame and project their own sickness onto those they victimize, and threaten, threaten, threaten. ("Look, Bin Laden's sending another death threat LOL!!) Oh please!!