Baby Horse Dies of Starvation while under BLMs Care 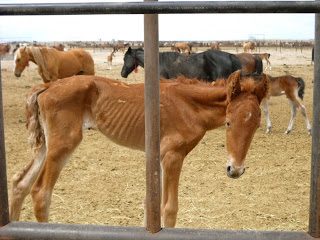 Visitors went to the BLMs Broken Arrow facility as they do every Sunday. Observers have been traveling to the remote privately contracted facility to document the conditions our wild horses are held in after being rounded-up by the Bureau of Land Management (BLM) this past winter.

Dean Bolstad of the BLM led the tour. Bolstad informed the visitors that there had been over 300 births at the facility and the daily number of births had slowed.

As the tour was ending observers came across a severely emaciated foal. The mare was present and protective but appeared to have no bag. They notified Bolstad who said he would contact the vet immediately after the tour.

When questioned as to how often the horses were observed by the on staff veterinarian Bolstad responded that the vet was out to the facility daily.

"I'm assured repeatedly that these horses are cared for," said Elyse Gardner "so why does it seem that it is the public observers that continually need to bring so many overlooked injuries, illness or orphaned foals to the attention of the BLM?"

The foal was euthanized Sunday after observers vacated the facility.

Births and deaths of foals are not counted in inventory until they are freezemarked at 4-5 months of age. So the death of this foal is not expected to appear on the BLM update page.