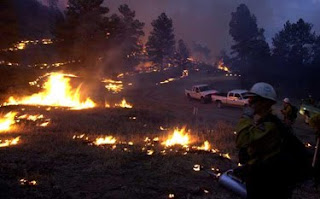 
Following a spate of such wildfires, Congress the next year passed the Healthy Forests Restoration Act, which among other things, requires public agencies to spend 50% of their fuel-reduction budgets on public lands that border developed areas - otherwise known as the wildland-urban interface.

A new study, however, shows that this law is actually discouraging private landowners from taking measures to reduce wildfire risk on their own property. Furthermore, by subsidizing residents who choose to live in high-danger areas, the law encourages risky decisions while draining resource from fighting wildfires on more remote public lands.

More people live in areas vulnerable to wildfire, as the human population increases and residential development pushes into wildlands. In 2003 alone, wildfires burned more than 4,508 homes and caused more than $2 billion in damages in wildland-urban interfaces of the United States. 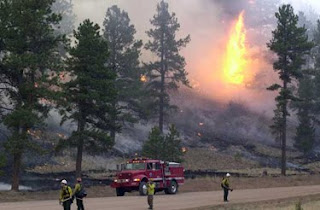 Gwenlyn Busby and Heidi Albers used a game-theory model to get inside the minds of private landowners and public land managers and figure out why they make the decisions that they do when it comes to protecting against wildfire on their lands. Game theory is a type of applied math that analyzes how people make decisions when the consequences depend on the decisions of others.

The researchers found that the Healthy Forests Restoration Act, by requiring that at least fifty percent of fuel-reduction budgets to be used in wildland-urban interfaces, enables private landowners to freeload off publicly funded fire-prevention efforts.

Furthermore, the Act makes it more difficult for managers to protect rare species and other natural resources on public lands away from developed areas. Government agencies often seek to limit the severity of wildfires by removing dried grasses, brush, and other fuels from public lands, but tight budgets make it impossible for public land managers to conduct fuel reduction everywhere that it is needed.

On its face, the Healthy Forests Restoration Act seems like a logical, targeted way to cut down on wildfire damage. However, as the game theory model in the study reveals, private landowners in the wildland-urban interface tend to perform little fuel reduction on their land when the government conducts extensive treatment nearby.

According to Busby and Albers, this “pattern of fuel treatment comes at a cost to society because public resources focus in areas with mixed ownership, where local residents capture the benefits, and are not available for publicly managed land areas that create benefits for society at large.”