There's Still Gold in Them Thar' Hills: How to Stake Your Own Claim 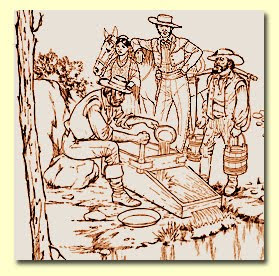 Click on title above to read what just may be an answer to our public lands ranching problems:Public Lands Mining by Individal Citizens

There are federally administered lands in 19 States where you may locate a mining claim or site.

You may prospect and locate claims and sites on lands open to mineral entry. Claims may not be staked in areas closed to mineral entry by a special act of Congress, regulation, or public land order. These areas are withdrawn from the operation of the mining laws.

There is usually a 1/4-mile buffer zone withdrawn from location of mining claims on either side of a river while the river is being studied for inclusion in the Wild and Scenic Rivers System. Additions to the National Wilderness Preservation System are withdrawn to mining claim location at the time of designation by Congress. Mining activities are permitted only on those mining claims that can show proof of a discovery either
(1) by December 31, 1983, or
(2) on the date of designation as wilderness by Congre