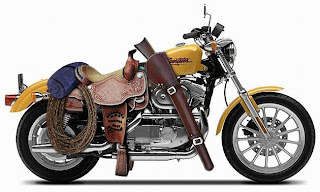 Thursday, February 25, 2010
Congress reacts with outrage to administration plan to take public lands without public debate
OFF THE WIRE
Feb. 24, 2010

PICKERINGTON, Ohio -- Bipartisan reaction was swift following the publication by the American Motorcyclist Association (AMA) and others of an internal Department of Interior (DOI) document that revealed the agency's plan to designate without public debate as many as 13 million acres of public and private land in the West as National Monument areas.

"The Obama administration continues to put the needs of environmentalists who want to keep the public away from public lands above the needs and desires of Utahns," Sen. Robert Bennett (R-Utah) said.

"There are special interest groups whose sole purpose is to lock up land without any consideration given to the importance of wholesome outside family recreation," Hastings said. "While they are entitled to that view, it's deeply troubling that the President's administration is seemingly eager to help turn that view into reality by unilaterally imposing new monument designations without the consent of the people and communities who will be directly impacted."

Rep. Rob Bishop (R-Utah), chairman of the Congressional Western Caucus, and ranking member of the Natural Resources Subcommittee on National Parks, Forests and Public Lands, noted that people from around the world visit the West to take advantage of broad-ranging recreational opportunities.

"Unfortunately, the current administration seems intent upon locking up much of the public lands throughout the West from recreational use, as witnessed in the documents that recently surfaced from the Department of Interior outlining new areas for potential national monument designations," Bishop said. "I commend the American Motorcyclist Association for its continued advocacy on behalf of not only motorcycle enthusiasts but all outdoor recreators, who are an important component of the West's tourism industry."

Interior Department spokeswoman Kendra Barkoff told the Salt Lake (Utah) Tribune that the documents that created the uproar were simply the result of a "brainstorming session" at the department.

But Rep. Jim Matheson (D-Utah) remained concerned: "Given the lingering frustration felt by many Utahns following the 1996 'stroke of the pen' monument designation (of the Clinton administration's 1.9 million-acre Grand Staircase-Escalante National Monument), it is totally inappropriate for this federal agency to even have preliminary discussions without involving the stakeholders on the ground."

"It remains incumbent upon the government to responsibly protect our lands for the people, not from the people," said Ed Moreland, AMA vice president for government relations. "And that means proposals for land-use designations must be fairly debated. This proposal is not only an end-run around Congress, but also around the individuals and communities who would be directly impacted by this type of administrative maneuver.

"We are pleased to hear that there is bipartisan, bi-cameral support for an open dialogue on the long-contentious issue of public-land designations," Moreland said. "We hope that this issue will serve as a catalyst for bringing together both sides of the debate to work out any differences and preserve opportunities for responsible recreation on America's public lands for all Americans."

To take action on this issue, go to AmericanMotorcyclist.com > Rights > Issues and Legislation. To receive e-mail alerts, sign up in the "Get Involved" section of the Rights page.

About the American Motorcyclist Association
Since 1924, the AMA has protected the future of motorcycling and promoted the motorcycle lifestyle. AMA members come from all walks of life, and they navigate many different routes on their journey to the same destination: freedom on two wheels. As the world's largest motorcycling rights organization, the AMA advocates for motorcyclists' interests in the halls of local, state and federal government, the committees of international governing organizations, and the court of public opinion. Through member clubs, promoters and partners, the AMA sanctions more motorsports competition and motorcycle recreational events than any other organization in the world. AMA members receive money-saving discounts from dozens of well-known suppliers of motorcycle services, gear and apparel, bike rental, transport, hotel stays and more. Through its Motorcycle Hall of Fame Museum, the AMA preserves the heritage of motorcycling for future generations.


Click on title above for original article;
http://bikersofamerica.blogspot.com/2010/02/congress-reacts-with-outrage-to.html
Posted by Mz.Many Names at 10:42 AM