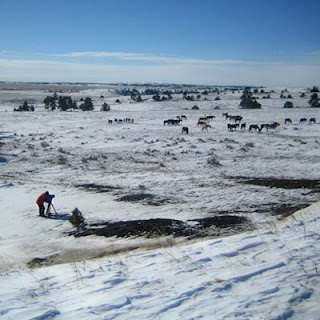 HOT SPRINGS, S.D. (2/2/09) - The Black Hills Wild Horse Sanctuary will be featured on NHK Japan Public Broadcasting. The three-person production crew filmed one day on location at the Wild Horse Sanctuary in January. The television documentary will feature the Indigenous tribes, wild horses and bison of the Great Northern Plains. The program will air in Japan April 2009.

NHK Enterprises produces programs in documentary, TV drama, entertainment, cartoon, and culture genres, as well as Japanese-language version of programs purchased from overseas, in addition to a wide variety of FM radio program. The production company works on international co-productions, including "Planet Earth" with the BBC and programs for Chinese broadcasting stations.

The Black Hills Wild Horse Sanctuary is the largest private non-profit wild horse sanctuary in northern America and has been in continuous operation since 1988. It is home to over 500 wild mustangs. The Sanctuary's locations have been featured in film and documentary projects including; Touchstone Pictures HIDALGO (2004), TNT Television movie CRAZY HORSE, History Channel COMANCHE WARRIOR and Paramount/Vantage Films INTO THE WILD.