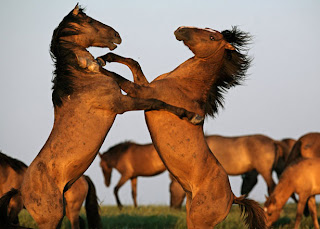 Mustangs
Spirit of the Shrinking West


In the winter of 2oo5 Nelson Quispe, new from Peru to North America, was hired to herd sheep in Wyoming's Red Desert. His sheep-rancher boss, Pat O'Toole, gave him a six-year-old mustang to help him cover the long miles over snow whales and sagebrush to open range. The mustang was white all over, with dark spots on his rear, betraying some Appaloosa in his ancestry, but with hooves like dinner plates, suggesting the additional introduction of something more along the lines of a draft horse. He'd been named Dot by the inmates at the Honor Farm near Riverton, where he'd been trained as a wild-born five-year-old. As a result the mustang had both native sense and correctional-facility manners, and you can do a lot worse than that in a horse.