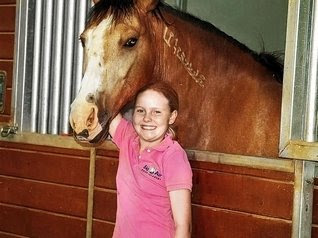 
A Reno girl is among the nearly 200 children nationwide honored by Kohl's Department Stores this month as a winner of the Kohl's Kids Who Care scholarship program, designed to recognize young people's volunteer efforts.

Each regional winner received a $1,000 scholarship toward post-secondary education. Winners were selected based on "initiative, leadership, creativity and generosity."
Sarah Osborne, 11, a sixth-grader at Our Lady of the Snows School, was described by Kohl's officials as one who "stood out among nearly 18,000 nominees nationwide for her remarkable community service by making and selling Christmas ornaments to raise awareness for wild horse capture."

Sarah's mother, Betsy Osborne, said that Sarah, her brothers and her classmates have made the ornaments for the Nevada Christmas tree in Washington, D.C. for the past 6 years.

"Sarah's theme has always been 'save the wild horses of Nevada,'" Betsy Osborne said. "Sarah sold duplicate ornaments in the Reno area and donated the money to the Virginia Range Wildlife Protection Association. The money has gone to help the mustangs that roam the Virginia Range."

Regional winners qualify for one of 10 national scholarships of $5,000 each. Kohl's also will contribute $1,000 to a nonprofit organization on behalf of each national winner, which will be announced later this month.

Sarah's passion is horses, her mother said. She spends an average of five days a week riding at Big Air Riding Academy. After her lessons, Sarah helps with horse grooming, tacking and stable management.