US to Open Public Land Near Parks for Drilling 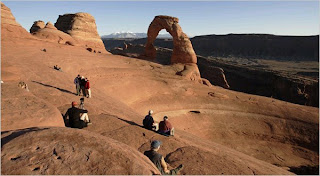 Published: November 7, 2008
The Bureau of Land Management has expanded its oil and gas lease program in eastern Utah to include tens of thousands of acres on or near the boundaries of three national parks, according to revised maps published this week.

National Park Service officials say that the decision to open lands close to Arches National Park and Dinosaur National Monument and within eyeshot of Canyonlands National Park was made without the kind of consultation that had previously been routine.

The inclusion of the new lease tracts angered environmental groups, which were already critical of the bureau’s original lease proposal, made public this fall, because they said it could lead to industrial activity in empty areas of the state, some prized for their sweeping vistas, like Desolation Canyon, and others for their ancient petroglyphs, like Nine Mile Canyon.

The bureau’s new maps, made public on Election Day, show not just those empty areas but 40 to 45 new areas where leasing will also be allowed.

The tracts will be sold at auction on Dec. 19, the last lease sale before President Bush leaves office a month later. The new leases were added after a map of the proposed tracts was given to the National Park Service for comment this fall. The proximity of industrial activity concerns park managers, who worry about the impact on the air, water and wildlife within the park, as well as the potential for noise, said Michael D. Snyder, a regional director of the Park Service who is based in Denver.

The Park Service is usually given one to three months to comment on leases, Mr. Snyder added.

“This is the first time,” he said, “where we have not had sufficient opportunity to comment.”

He said he had asked the Bureau of Land Management’s state director, Selma Sierra, to pull the new tracts from the December auction for more study. She refused.

Kent Hoffman, a deputy director of the land management bureau’s Utah office, said the Park Service had ample opportunity to review the broad management plan under which the leases were developed, even if it was not given the usual notice of which leases were being offered for sale. Mr. Hoffman added that 37 days remained to air any protests and review the decision about which tracts to lease.

If any leases are sold Dec. 19 and subsequently delivered to the buyers before Inauguration Day, however, it will be difficult for the new administration to reverse those decisions.

The perennial struggle over the use of public lands in the West, which traditionally pits ranchers, miners and oil and gas interests against environmentalists and groups interested in historic preservation, has been particularly acute in Utah.

Many in the state, where resentment of the federal government runs deep, remain angry about the Clinton administration’s decision in 1999 to set aside for protection three million acres deemed to have “wilderness qualities.” The state sued; in 2003, the Bush administration settled and removed protections from those acres.

Before the new lands could be opened to leasing, the land management bureau had to revise its resource management plans designating which areas are appropriate for mining, drilling and motorized recreation and which should remain free of such activity. Last week, six such plans, covering the central and eastern parts of Utah, were approved. The Dec. 19 auction was expected to include energy leases of some land previously off limits, like Desolation Canyon. But not until Tuesday did the bureau release the final maps containing the new leases near park boundaries.

Kathleen Sgamma, the government affairs director of the Independent Petroleum Association of the Mountain States, said of the new lease proposals, “If you can’t develop oil and natural gas in this part of rural Utah, we might as well concede the United States has lost all interest in energy security.”

But David Nimkin, the southwest regional director of the National Parks Conservation Association, said, “It’s very clear that there’s a time clock, and they are anxious to move these out for sale, for obvious reasons.”

The leases, Mr. Nimkin said, seem to be “profoundly in conflict with the direction of the new administration and the new Congress.”