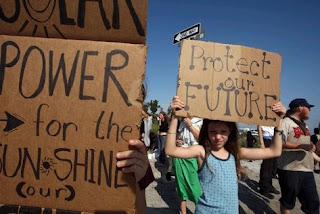 WEST PALM BEACH — A leader of a local environmental action group testified Wednesday that he resorted to civil disobedience - blocking the entranceway to a huge power plant's construction site - after other efforts to stop the project failed.

Peter Tsolkas, 27, and six others are on trial, charged with unlawful assembly, resisting arrest without violence and and trespassing after their arrest Feb. 18 while protesting Florida Power & Light's West County Energy Center. Tsolkas testified that the groups Everglades Earth First! and the Palm Beach County Environmental Coalition had tried letter writing and speaking at planning meetings.

So he and others linked themselves together in a contraption of PVC pipe, chicken wire and tar and would only move if FPL's chief executive or the governor arrived and agreed to stop the plant's construction. Meanwhile traffic along Southern Boulevard backed up for miles, as trucks were blocked from entering the site. The Palm Beach County Sheriff's Office dispatched a helicopter and its Emergency Field Force to resolve the matter, according to testimony.

"This was a moment that felt pretty crystal clear to me," Tsolkas said.

"Why not go in the free-speech zone?" asked Assistant Public Defender Charles Fountain II, referring to an area set aside for protesters.

"Because I came to stop a power plant, not stand in a free-speech zone," Tsolkas said.

A fellow defendant on trial, Lynne Purvis, testified that she ignored the "No Trespassing" signs on the Palm Beach Aggregates property and intentionally disobeyed the sheriff's deputies commands to leave, which surprised her a little, she said.

"We were hoping they would sympathize with us and say, 'Thanks'," said Purvis, 29.

Also on trial for the misdemeanor offenses are Marc Silverstein, Russell McSpadden, Richard Halsted, Brandon Block and Noah Wilson. They are using a rarely employed "necessity" defense- that it was necessary to commit the crimes to prevent imminent danger or death.

To that end, jurors heard hours of testimony from experts Wednesday about global warming and the effects of the new natural gas-powered plant on the surrounding water supplies and aquifers.

Dr. Sydney Bacchus, a hydroecologist, testified the plant's water requirements equal that of 50,000 homes and it is potentially one of the largest plants of its kind in the nation. Bacchus testified FPL is permitted to unload 13.5 million gallons a day of contamained water, injecting it into underground aquifers and allowing it to seep into water bodies. With her testimony, came charts and graphs and photos of aquifers and water bodies.

Two jurors leaned all the way forward in their chairs, mouths agape as they studied them.

Bacchus talked of cypress roots which will rot and trees that will topple after marshes are drained. She compared it to receding gums, showing jurors a large photo of a set of teeth.

"Are you saying this tooth decay was caused by the West County Energy Center?" Prosecutor Danielle Croke repeatedly asked.

On cross examination, Croke sought to demonstrate that none of the power plant's perceived threats to safety and the environment are imminent enough to necessitate a crime.

The state attorrney's office has aggressively pursued the arrested protesters, in part because of the considerable cost the Sheriff's Office incurred after dispatching the elite field force.

The protesters could face steep fines and jail or probation if convicted.

Closing statements and a verdict are expected Thursday.
Posted by Mz.Many Names at 12:04 AM