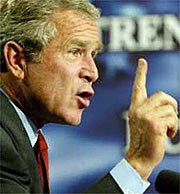 In his last days in office as President, George Bush is busy watering down hard-won environmental regulations, which new boy Barack Obama may find difficult to roll back. Jimmy Lee Shreeve reports for the Daily Telegraph

He could've coasted the last days of his presidency pursuing his hobbies of bass fishing and watching baseball.

Instead George W Bush is working at breakneck speed to water down many major environmental safeguards protecting American's wildlife, national parks and rivers.

Critics say it's all about protecting the interests of his big business buddies before the removal trucks roll into the White House on 20th January.

One thing is for sure, it looks like Dubya was listening when the "Drill, baby, drill" mantra echoed through the Republican National Convention in Minnesota on 3rd September.

Even then, he probably sensed the game was up for the lacklustre John McCain/Sarah Palin campaign and that Barack Obama would walk the presidency. Therefore, he knew he had to move fast to knock back the "pesky" environmental regulations that have long hindered the plans of his pals in Big Oil.

When Barack Obama won the election on 4 November, the Bush administration got down to announcing a whole raft of so called "midnight regulations" which would drastically change America's environmental laws – for the worse.

Yet the mood of the nation has undergone a huge sea change. Americans voted in overwhelming numbers to move away from the failed energy policy of "drill, baby, drill" to one based around clean, efficient and renewable energy – the strategy advocated by Obama.

That's what the people want. But, like it or not, passing last minute regulations is what outgoing presidents do – in fact, the precedent was set in 1801 when John Adams appointed a group of "midnight judges".

Supporters of Bush say he is merely doing what he can to preserve the conservative principles of pro-business laissez faire economics and light-touch regulations – both of which are typically undermined under the Democrats.

Critics, on the other hand, say he is showing utter contempt for the environment and is pandering to the old school business lobby that puts "profit above planet".

This is certainly the way it looks. On 17th November, for example, the Bush administration announced new regulations that would allow commercial oil shale operations to go ahead on up to two-million acres of public land in Colorado, Utah and Wyoming.

Objections from Colorado Gov Bill Ritter and a majority of the state's congressional delegation were dismissed. Ritter called the decision "not just premature, it's hasty and I would even argue reckless." Worryingly, amendments were built into the regulations to prevent public appeals against the proposed projects.

The Bureau of Land Management (BLM), part of the Department of Interior, published the new rules on 21st November that will take effect just after Congress reconvenes with a larger Democrat majority.

The move was geared to lay the legislative groundwork for the creation of a giant US oil shale industry. Shale is seen as the new black gold because it contains Kerogen, a type of immature oil.

Extracting oil from shale, however, is still in its early stages. But oil companies see the process as a natural progression from tar sands operations in Canada which have successfully used a similar extraction technique.

In a statement, Bureau of Land Management director Jim Caswell said: "The goal of the BLM's oil shale programme is to promote economically viable and environmentally sound production of oil shale on Western lands, where we estimate deposits hold the equivalent of 800 billion barrels of oil – enough to meet US demand for imported oil at current levels for 110 years."

Clearly, there's a definite case for the US reducing its dependence on the Middle East for oil. But is the project really ecologically sound?

Not according to environmentalists. They claim that the energy needed to extract oil from shale – a process that requires extremely high temperatures – means the resulting product has a carbon footprint 5-10 times higher than regular oil.

"Cooking rocks and scorching the earth is not a solution to our energy crisis," says Amy Mall, senior policy-maker at the Natural Resources Defence Council(www.nrdc.org)

"This is just another government giveaway to Big Oil, which doesn't make sense when we have better, cleaner energy sources available now.

"We need to invest in clean energy solutions – like plug-in cars – that will reduce our dependence on oil, not dirtier fuels that spoil public lands, hasten climate change and suck up limited water supplies."

The Endangered Species Act (ESA) is also under siege during these last days of George Bush's administration.

Under new rules published on 21st November, Federal agencies would be able to decide for themselves whether projects like new highways or dams pose a threat to wildlife and the environment.

Currently, under the Endangered Species Act, Federal agencies are required to get clearance from a wildlife biologist who is not generally shy of ordering modifications to proposed projects.

Since the ESA came into effect in 1973, 1-in-3,500 Federal actions have been blocked. This is very likely to be reduced with the new rules.

The Bush administration is also easing the rules on environmental pollution. Under another of Dubya's midnight regulations, factory farms will be allowed to decide whether or not they need permits to release waste into streams and rivers.

The fear is that factory farmers will be unable to resist dumping waste – harming already overburdened rivers and streams.

On top of this, the Environmental Protection Agency is finalising new air quality rules that would make it easier for carbon intensive industries, like coal-fired power plants and oil refineries, to be located near national parks. Fourteen regional administrators in the agency itself have voiced strong objections.

Rules have also been proposed to dilute pollution controls on new fossil fuel power stations, and the White House has ordered the Environmental Protection Agency to withdraw a new regulation mandating that truck manufacturers install equipment to monitor vehicle pollution.

The Bush administration denies that the flurry of rule changes is politically motivated. White House spokesman, Tony Fratto, insisted that there had been no attempt to rush regulations into place "ahead of the incoming, next administration."

A House of Representatives Select Committee report on energy and independence, released in early November, however, stated that: "While the first 100 days of the Bush administration initiated perhaps the worst period of environmental deregulation in American history, the last 100 days of the Bush presidency could be even worse."

Will Barack Obama roll back the midnight regulations?

After accusing the Bush administration of "moving aggressively to do things that are probably not in the interests of the country," John Podesta, a senior figure in the transition team, hinted that the new administration would roll back any measure it didn't like as swiftly as possible.

Will they succeed? Only time will tell. What is certain is the incoming Obama administration has got the mood of the nation