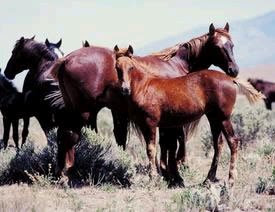 Mares and foals from the Onaqui Herd near Dugway, Utah. © BLM

Eighty wild mares gathered by Utah authorities will be released back in the wilderness after receiving contraceptive pellets.
The Bureau of Land Management in Utah is this month removing wild horses from the Cedar Mountain Herd Management Area (HMA).

The appropriate management level for the area has been established at 190 to 300 wild horses.

The bureau wants to remove 440 horses to get to the low end of that level.

About eighty of the mares gathered will be administered a pelleted contraceptive vaccine and returned to the range.

Since 1992, the Humane Society of the United States has collaborated with the BLM to develop a contraceptive agent that meets the BLM's requirements for practical and cost-effective wild horse population control.

Fertility control is not intended to totally replace the removal and adoption of wild horses.

The gathered horses will be transported to the Salt Lake Wild Horse and Burro Centre in Herriman, Utah, to be prepared for adoption. The first opportunity to adopt these horses will be on February 21 through BLM's Adopt-a-Horse-or-Burro Programme.

Animal welfare groups have expressed concern over the number of horses being held in captivity by the Bureau of Land Management. More than 30,000 are currently in holding facilities, roughly equivalent to the number still roaming free across the rangelands.

The number in captivity has put pressure on the bureau's budget and it has explored the possibility of euthanizing horses considered unadoptable, or selling them without limitation - a move horse welfare groups believe will result in many going direct to slaughter.

Such plans are on hold while other options are considered, including a proposal by Madeliene Pickens, wife of billionaire oil man T. Boone Pickens, to buy up to a million acres of rangeland to provide a home for the horses.