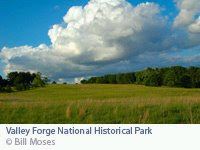 This past weekend our nation remembered those who have suffered hardship for--and those who have even given their lives for--freedom and democracy. While much of this sacrifice has taken place abroad, one place on U.S. soil that symbolizes this struggle for freedom is Valley Forge. Unfortunately, the historic landscape of Valley Forge National Historical Park is imminently threatened. A poorly-conceived development proposal on historically significant, private land inside the park is jeopardizing this hallowed ground. Despite widespread public opposition and an ongoing lawsuit, the American Revolution Center (ARC) has announced plans to break ground on its commercialized museum complex in June.

Take action: While the superintendent at Valley Forge has expressed his concerns over the development's impact on the surrounding national parkland, the Department of the Interior has yet to take official action to stop this development. The court needs to hear from the Obama Administration by June 15. Please write to President Barack Obama and ask him to join the legal action to protect Valley Forge's historic landscape.

Thanks for all you do,

This message was sent to you by the National Parks Conservation Association.