Leave the Wild Burros Be 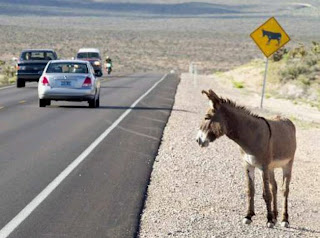 A sign on Highway 159 warns of a fine for feeding burros.

Beyond the Sun
Nevada Wildlife Federation: Burros
To most tourists, Southern Nevada’s wild burros are long-eared cuties that eat Cheetos from the palms of their hands.

But wildlife biologists warn that the fuzzy equines can be problematic if not downright dangerous.

With Memorial Day weekend coming up and trips to Red Rock and Lake Mead in the works, the staffs at those areas are hoping visitors avoid asinine behavior during encounters with their year-round residents.

In most cases, of course, the trouble is caused by humans, rather than any burro character flaw.

Case in point: Douglas Nielsen, Nevada Wildlife Department spokesman, once saw a car with burro heads jutting into driver- and passenger-side windows parked underneath a sign at Red Rock warning tourists not to feed the burros.

“People see a sign ... that says ‘Please don’t feed the burros.’ And what’s the first thing they do? Stop at the sign and feed them,” he said.

Perhaps in an attempt to vie for a Darwin Award, some tourists have gone so far as to put their children on the backs of burros, said Jerrie Bertola, a wild horse and burro specialist with the Bureau of Land Management.

Which leads us to annoying burro habit Numero Uno: They bite.

“They are wild animals,” Bertola said. “You never know when one will kick you or bite you.”

So how does the relationship go so quickly from vending machine snack nirvana to violence?

If unsuspecting tourists don’t have an apple, a carrot or some junk food in the car, burros have been known to take a bite out of whatever else is available — even if that something is a person. Children’s ears, in particular, must look tasty to burros because they often get nipped, according to Bertola.

Even the American Wild Horse Preservation Campaign — which disagrees with the BLM and other federal agencies on pretty much every aspect of wild horse and burro management — agrees that burros must be treated by visitors as the wild animals that they are. After centuries living in the wild in the Southwest, the burros, a symbol of the American West, have come far from their roots as domesticated pack animals abandoned by gold rush miners.

The burros are smart enough to navigate through fences and across cattle guards, according to Bertola, and a fistful of Doritos proffered from a Jeep window is enough to draw them out onto roads around Red Rock Canyon and Lake Mead national recreation areas. The animals then get hit by vehicles. The BLM says burros and humans are killed or injured in these kinds of accidents every year.

Annoying habit No. 3: They mill about camping areas near Lake Mead at night, noisily fighting among themselves for position in the herd.

Virginie Parant, campaign director for American Wild Horse Preservation, says humans have encroached on the burros’ habitat, not the other way around.

In other parts of the country, the National Park Service has resorted to shooting the animals — which burro advocates say flies in the face of a 1971 law protecting wild horses and burros. But in Nevada they are rounded up by the BLM and put up for adoption, said Ross Haley, a BLM wildlife biologist.

But encroaching on recreation areas isn’t the only reason the animals are rounded up, according to the feds. Annoying habit No. 4: They eat pretty much anything, and a lot of it. According to Haley, rather than just starving to death when drought eliminates high-quality food sources, as some other animals do during droughts, burros just eat more. And they hoard vital food and water sources, important to bighorn sheep and deer, even during wetter times. The plants they don’t eat, they are inclined to trample, so they’re hard on the desert and damage the range, some experts say.

But Parant and other wild horse and burro advocates say this is misinformation spread by the federal government, which is easily swayed by a hunting lobby interested in repopulating the Southwest with moneymaking bighorn sheep and eradicating burros and horses. She said burro populations are so small that the animals, which have been in the Southwest since the 1500s, are in danger of extinction.

According to BLM spokeswoman Jolynn Worley, there are an estimated 674 wild burros living in Nevada now, mostly in rural parts of the state. The BLM considers about 950 wild burros a manageable population for Nevada.

Parant says the land here could support many more burros than that.

The few burros that are rounded up each year are put up for adoption. The BLM actually has a waiting list for the adoptions. Some people use them as light pack animals for hikes or keep them as pets. Others turn the burros into “yard novelties,” even keeping them in front of their houses like living lawn ornaments, according to Bertola.

With the biting, kicking, braying and begging for junk food, who wouldn’t want one?