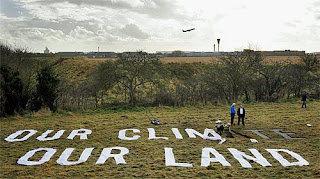 Protesters complete a message on the plot of land, which is about an acre in the heart of the development area where an extra runway would be situated.
A coalition that includes actress Emma Thompson plans to subdivide its acre in the area proposed for a runway. It hopes the move will bog down British government efforts.
By Henry Chu
January 14, 2009
Reporting from London -- And the award for best stalling tactic goes to . . . a coalition of environmentalists, scientists and actors -- including two-time Oscar winner Emma Thompson -- who are determined to scupper plans by the British government to build a new runway for Heathrow Airport.

The motley crew has bought a small plot, about an acre in size, in the heart of the development area where an extra runway would be situated. The group vows to subdivide the property into hundreds, perhaps thousands, of smaller parcels and sell them off to environmental activists around the world, in an effort to bog down the government if it tries to buy up or seize the land.

On Tuesday, the organization announced that 5,000 supporters had signed up to be named as co-owners of the full plot, in hopes of slowing any initial legal proceedings.

"It started like most good ideas around here, with a conversation down at the pub," the environmental organization Greenpeace said in a blog on its British website. "We're now the proud owners of a small piece of land within the site of the proposed third runway at Heathrow."

The collective purchase is the latest offensive in the long-running battle over enlarging Heathrow. With five terminals serving 68 million passengers a year, the airport is one of the world's busiest, both as a destination for incoming visitors and as a transit hub for travelers hopping between continents.


Airport officials, business organizations and the government of Prime Minister Gordon Brown contend that expanding Heathrow is vital to maintaining its status as a leading international airport. The current two runways, they say, are not enough to compete with European rivals or to meet the demands of the 92 airlines that use Heathrow, which is about 15 miles west of central London.

The government has promised to take community opinion into consideration before making a final decision on the third runway this month. In October, dozens of Parliament members in Brown's Labor Party urged the government to rethink its plan.

Opponents argue that the economic benefits of a third runway are overstated and that the environmental and human costs are too great. In addition to increased pollution and noise from more flights, an entire village would have to be razed, displacing hundreds.

"I don't understand how any government remotely serious about committing to reversing climate change can even consider these ridiculous plans," actress Thompson was quoted as saying. "It's laughably hypocritical. . . . We'll stop this from happening even if we have to move in and plant vegetables."

Supporters of the third runway poured scorn on the land purchase as a publicity stunt.

"If anti-aviation groups are really serious about climate change, they would be engaging in constructive dialogue with the industry about how we can protect the economic and social benefits it brings whilst dealing with its environmental impact. Instead, they seem more interested in PR stunts with eco-celebrities."

As in the U.S., the British government has powers of eminent domain that would allow it to force property owners to sell if it decides to go ahead with the airport expansion.

But runway opponents hope that chopping up their parcel into smaller bits would not only give the government a bureaucratic migraine but delay expansion at least until the next election, which is due by spring 2010. The Conservative Party, which is leading in the polls, is against the runway.