Update from the Field: 90-Day Stay of Execution for Over 500 Wild Buffalo 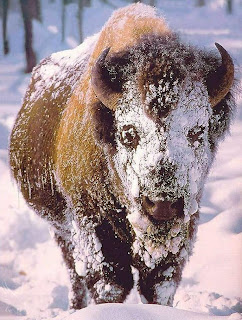 On Monday, February 14, U.S. District Court Judge Lovell rejected our Emergency Injunction and consequently sentenced over 500 of America's last wild buffalo to a death sentence. We are currently working on an appeal to this decision.

In the darkness of this decision, on Tuesday, BFC patrols were monitoring Yellowstone's Stephens Creek buffalo trap, anticipating the arrival of large livestock trailers that would arrive any day to haul the gentle giants away to slaughter. After hours of such heartbreaking vigilance, seeing buffalo forced into the handling area to suffer the tortures of squeeze shoots and sorting, we received shockingly fantastic news.

On Tuesday afternoon, Montana Governor Brian Schweitzer issued an Executive Order expressly forbidding Yellowstone National Park from shipping wild buffalo to slaughter facilities through Montana for the next 90 days. With all other routes closed due to snow, there are no other options for the Park. By his actions, Governor Schweitzer has effectively prevented Yellowstone National Park from slaughtering the 500+ wild buffalo currently trapped inside the Park's Stephens Creek facility.

BFC applauds this decision, celebrating Schweitzer's pronouncement not to allow slaughter, yet we are perplexed as to why Governor Schweitzer would make such a move. This is the same man who in 2005 reinstated the bison "hunt" as a form of "more tolerance" and who, just last year, boasted to livestock interests that "no governor in the history of Montana has killed more buffalo" than he has. In subsequent interviews following his executive order, Schweitzer is using the unsound argument of brucellosis as his flimsy reasoning, claiming to fear that transporting wild buffalo in livestock trailers could somehow threaten Montana's cattle with brucellosis. He is also claiming that the buffalo are Yellowstone's problem and that they must keep the population in check. Wild buffalo are ecologically extinct throughout their native range, and in great danger of becoming fully extinct with current management practices in place. If the brucellosis arguments Schweitzer is using were true, then hunting bison, elk and deer; bison quarantine; elk on the landscape; and numerous other activities would also be deemed unsound. As we see it, the governor is doing the right thing for the wrong reasons. What does this decision really mean for the buffalo currently in the trap, and for the others who need to access lower elevation habitat? Yellowstone Park officials have said they are frantically trying to interpret the meaning of the governor's order. Will the Park hold the 500+ buffalo until spring, risking injury, miscarriages, and sickness, or will they release them - as they should - and finally allow them to roam free? Does Schewitzer's executive order make the Interagency Bison Management Plan obsolete? There are more questions than answers with this incredible announcement. For now, we celebrate while we try to learn what is really behind it.

Yellowstone's immediate response has been to haze (push) buffalo further into Yellowstone, instead of ending hazing near the Stephens Creek Trap, as they have been doing for the sake of capture convenience. The Montana Department of Livestock's response has been to increase their patrols in the Gardiner area with the apparent goal of shooting bison. One bull escaped the agents by running up a steep mountainside and the agents have, as of this writing, been unable to shoot any others.

The Montana Department of Livstock tried to eliminate this wild bull buffalo from the landscape yesterday, but he escaped his aggressors and has lived another day wild and free!

The hunt also continues to take a toll on America's last wild population - which currently numbers fewer than 3,700 individual buffalo. More than 150 wild American buffalo have been killed by hunters on Gallatin National Forest lands, just outside of Yellowstone's northern and western boundaries. The Montana hunt finally ended on Feb. 15, and the Confederated Salish-Kootenai Tribes are also done with their buffalo hunt. The Nez Perce and the Confederacy of Umatilla Tribes are now the two entities hunting wild buffalo, both under treaty right. Their hunts will continue through the end of March. Wild buffalo will begin calving just a few weeks after that.
State hunters killed two young bull buffalo along the Madison River last weekend. Buffalo mourn or stay close when family members or comrades are lost. Hunters are shown thowing rocks and snowballs at the female buffalo who did not want to leave her killed family members.
BFC has been fully engaged in talking with hunters, letting them know what the buffalo suffer by state and federal agencies, and encouraging them to participate in efforts to gain ground for wild buffalo. Many hunters are unaware of how the buffalo are unjustly treated and killed by Montana and Yellowstone, and most who take the time to talk with us share our concern and desire for an end to the Interagency Bison Management Plan, and want wild buffalo roaming free on their historic range. As difficult as it is to bear witness to the hunting of this vulnerable population, we remain hopeful that hunters will realize their responsibility to the buffalo and begin to take the necessary actions to help the buffalo regain their native homelands throughout Montana and elsewhere.
Yellowstone National Park and Montana Department of Livestock officials have been hazing wild buffalo nearly every single day since winter begain.
Sadly, decision-makers continue to use living, breathing buffalo as chess pieces on the game board of the Montana and Greater Yellowstone landscape. State and federal agencies play political games while America's last wild buffalo continue to be disrespected, harmed, and killed by relentless harassment, captivity, hunting and slaughter. Habitat is the only solution to the buffalo question, and it is everywhere, all around us, just waiting for the human mind to change and embrace wild buffalo roaming free upon the landscape.
------------------------------
* WHAT YOU CAN DO

2. Contact your Members of Congress and urge them to intervene with the Park on your behalf and to support federal funding to protect America's last wild buffalo and their habitat. Ask them to support the re-direction of funds wasted on the Interagency Bison Management Plan towards habitat-based solutions that honor the wild integrity of our national heritage. Write Your Representative & Write Your Senators

3. Contact Montana Governor Brian Schweitzer and THANK HIM for the 90-day stay of execution, tell him he did the right thing. Please also remind him that wild buffalo must be allowed to access habitat in Montana. Brucellosis is not the issue, but habitat for wild buffalo is the solution. Remind him that until Montana embraces and respects wild, free-roaming bison, the state will continue to be globally shamed by these actions against America's last wild buffalo! Remind him that tourism sustains Montana. governor@mt.gov 406-444-3111

5. Write Letters to the Editor to newspapers in your region to help raise awareness and bring an end to the unjust treatment of America's last wild buffalo.

6. Vote for wild buffalo and all wildlife with your money by Boycotting beef.

7. Volunteer with BFC by joining us on the front lines! volunteer@buffalofieldcampaign.org 406-646-0070


THANK YOU! Please spread the word to save these herds by telling everyone you know what is happening to the country's last wild buffalo and what they can do to . Knowledge is power!

Raise your hand if you've had measles.

OK, those of you with your hands up? We're going to permanently remove you from the population-just as a safeguard-in the name of disease risk management. What, you're objecting? Well, yes, that's true-evidence of past exposure doesn't mean you're actively infected now or that you can transmit the disease, but that's a minor detail, isn't it?... and better safe than sorry, right? So off you go, the line forms here. ... Read the full essay here

Kathleen Stachowski is a Buffalo Field Campaign activist/fundraiser and former board member. Contact her.

"When Congress drew a square on a map in 1872 and declared the enclosed 2 million acres as Yellowstone National Park, no one could tell its wild inhabitants the exciting news. Wildlife knows no boundaries. In fact, the largest wildlife migration in the lower 48 states leaves Yellowstone and passes by [the Gardiner Basin] every winter, returning to the park in the spring. Look upriver. There, herds of elk, deer, pronghorn antelope, bighorn sheep, and sometimes bison descend from the park's high plateaus and move down river in search of food and shelter. Elk travel as far as 20 miles through this valley. They follow each other single file along ancient routes trodden by hooves of their ancestors.

"Finding winter range is as instinctive for elk and deer as it is for us to find our way to the refrigerator. Thousands of hooved mammals escape the Arctic storms that whirl into Yellowstone by migrating to winter range. They repeat a centuries-old tradition of moving to lands free of snow where food is more plentiful and shelter is close by. To spot wildlife on winter range, look for grassy, sunny and windy slopes adjacent to clumps of trees or dense, north-facing forests. And please, watch all wildlife from a distance. When an animal flees from you, it uses energy that could be spent staying warm and well fed.

Think of Yellowstone National Park as the heart of a giant and this valley as an arm extending north. Migrating animals move like blood flowing to the fingertips and returning to the heart. The activity of people can constrict the migration arm that wildlife depends on for survival. "

~ From signs posted in Gallatin National Forest at a wildlife viewing area across from Devil's Slide, along the Yellowstone River just north of Yellowstone National Park. Why, with all of this sound logic, are wild buffalo so neglected in their needs to live as other wildlife? Why are they the only ones prevented from accessing the same critical winter range as all other area wildlife? This same corridor is extremely important for America's last wild buffalo, yet 500 are currently confined inside Yellowstone's Stephens Creek bison trap for attempting to access it, and countless others are repeatedly chased off this important landscape, or shot.
Posted by Mz.Many Names at 10:28 PM