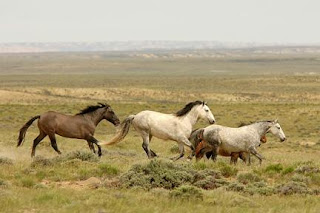 Oh yes, they call it "adoption," but we know what happens to the "adopted" ones after only one year.....


ROCK SPRINGS -- It's a sure sign that things really are tough all over: rock-bottom prices for horses.

Bureau of Land Management officials announced the agency will offer 30 mares for adoption at its Rock Springs holding facility next week for a "special incentive fee" of $25 per animal, or $100 off the regular fee.

Three other horses will be available for adoption at the regular fee of $125, said BLM spokeswoman Lorraine Keith.

The offer is a spin on a past BLM price offer -- $125 per horse and $25 more for a "buddy" -- and is indicative of the agency's struggle to find buyers for wild horses.

The 30 mares, two halter-trained two-year-old geldings and one halter-trained five-year-old mare to be offered in the Rock Springs sale were captured last year during BLM wild horse roundups.


The reduced fee is one of the agency's latest efforts to boost sagging wild horse adoptions, which have declined sharply in the past year because of the economic downturn.

The BLM rounds up wild horses from herds in Wyoming that have grown too large to be sustained by the available forage, and makes them available for adoption by the public.

Without any predators, wild horse populations can grow quickly and put strains on available federal habitat.

There are about 33,000 wild horses on public rangelands across the West and some 4,500 wild horses in Wyoming, most of which are located in Sweetwater County.

There are also about 33,000 horses and burros currently in BLM holding pens across the country at a cost of about $28 million per year.

In 2002, more than 7,700 horses were adopted nationwide, according to BLM figures. But last year, as part of a steady decline, the number of adopted horses dropped to 3,700.

For the past several years, BLM biologists have been ramping up contraceptive programs in an effort to reduce fertility in wild herds. The Government Accountability Office has suggested the BLM consider euthanizing wild horses to cut costs.