Salazoo Responds to Request for Moratorium on Round-Ups 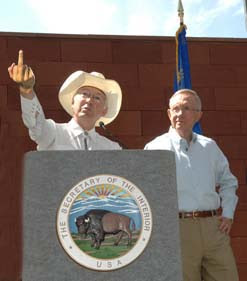 Sec of the Interior & Cattleman Ken Salazar (aka "Salazoo",) his friend and commerade in crime "Hairless" Harry Reid standing at his side,..responds to wild horse and burro advocates request for a moratorium on all round-ups; Tells Advocates, District Court Judge to *!@k Off!

HOUSTON, (Horseback) - When the Bureau of Land Management began their “gather’ of Wild Horse on private land on Monday, Horseback Magazine asked to go along on horseback with a reporter and photographer. We promised to be unobtrusive. We were politely turned down and told the agency would allow no press to witness what has turned into a brewing scandal for the Obama administration. We interviewed BLM spokesperson Heather Emmons.

HORSEBACK: Federal Judge Friedman last week advised against this gather. Why is the agency doing this against his advice?

BLM: Uh, well the judge ruled in our favor that we could actually go ahead and gather.

HORSEBACK: But he advised against it.

BLM: Well, all I know is that we were given the okay to go forward so we started our gather this morning.

HORSEBACK: Whose decision was it to start the gather against the judge’s advice?

HORSEBACK: Was it Mr. Abbey’s decision? Whose decision was it? That’s what I’m asking.

BLM: Well, I can give you the name of someone to talk to with regards to that. I can’t really talk to that.

HORSEBACK: Can you find out for me? I don’t necessarily need to talk to them. I just want to know who made the decision to go against a federal judge’s advice.

HORSEBACK MAGAZINE: What is your plan for allowing the media access to the roundup?

HEATHER EMMONS, BLM: We are going to be on private land. We are planning specific dates where we can escort media it to the gather, and then out…

BLM: That’s what I’m trying to convey to you. We can’t let you have full access with this one.

HORSEBACK: What are you hiding?

BLM: We’re not hiding anything, sir.

HORSEBACK: Isn’t it a fact that the BLM always prohibits the press from coming in and having full access?

BLM: We like to work with people and take them in with escorts only because it’s so remote out here.

HORSEBACK: In other words, you like to control the situation.

BLM: Well, we like to be able to explain what’s going on, make sure people are there for people with questions to help them out.

HORSEBACK: How much of the gather will be on public land? How many days?

HORSEBACK: Will you keep people in an observation area, or will they be able to go anywhere they want?

BLM: Well, we’ll probably put them in an observation area depending on where it is and how we set it up. As you probably well know, horses spook very easily, so we can’t have people roaming around for the safety of the attendees because the horses spook if they see any movement whatsoever, they turn around and run the other way.

HORSEBACK: I run a horse magazine. I’m perfectly aware of horse behavior. What we have in mind specifically is not to do anything that would spook a horse – but have someone on horseback standing still within a hundred yards of where the gather is taking place – standing very still and not spooking.

BLM: They’ll see you, and we don’t know exactly where the helicopter is going to guide the horses.

HORSEBACK: Was anyone from the press and public out there today?

HORSEBACK: Who is the landowner by the way?

BLM: You know, in this case, I’m not sure of the names of them but I know our Horse and Burro people have spoken with them.

HORSEBACK: Could you research that for us please and get us contact information?

BLM: I sure can. We are doing a media day on Wednesday of this week.

HORSEBACK: What is going to take place at the media day?

BLM: We’re going to have everyone meet at BLM in Winnemucca at 6 AM on Wednesday morning and do a briefing to explain to people what they are going to see, what we intend to do, how it works. Then we are gong to caravan out to the site and watch horses be gathered for a few rounds.

HORSEBACK: How long will the media be out there?

HORSEBACK: And how many media days are you planning?

BLM: We don’t know at this point. We’re just going to kind of gage the interest.
Posted by Mz.Many Names at 12:17 PM

Another BIG BLM lie; that thing about needing to do the gather on private property is redliclous when you consider that of all the private property in the area is SURROUNDED by PUBLIC LANDS.
I am sure the contractors (Catoor) have enough portable corrals to get the job done on public lands, IF ONLY they wanted to.